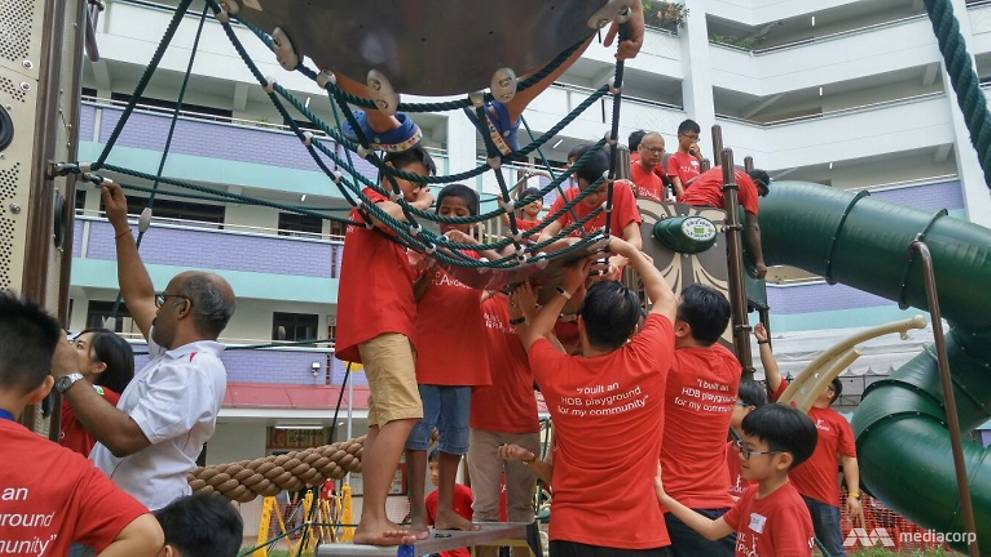 More residents to be involved in building playgrounds in their estates

SINGAPORE: Five existing playgrounds in four towns, namely Toa Payoh, Pasir Ris, Woodlands and Choa Chu Kang will be rejuvenated with the help of residents and their community, announced the Housing and Development Board (HDB) on Sunday (Jan 7).

Following the successful pilot of HDB’s Build-A-Playground (BAP) initiative at Canberra estate in Sembawang, which saw residents coming together to co-create a playground for their estate, the BAP will be extended to four other HDB towns under estate renewal plans.

Engagement activities with residents for the planning of the new playground at Tembusu Park will begin this year.

The announcement comes after the Adventure Playground @ Canberra, a pilot project under the BAP initiative, was declared open by Minister for National Development & Second Minister for Finance Lawrence Wong on Sunday.

Located at the Canberra estate in Sembawang, the 185 sqm treehouse-and-kelong inspired playground was co-created by some 1,800 people, including residents and students from nearby schools.

It was conceptualised after gathering feedback from the community through various engagement activities. Residents had suggested the kelong (fishing jetties) theme as they wanted it to reflect the heritage of Sembawang, which used to be dotted with fishing villages and kelongs.

Speaking at the event, Mr Wong said opportunities to further expand the BAP initiative to more HDB estates across Singapore will continue to be explored.