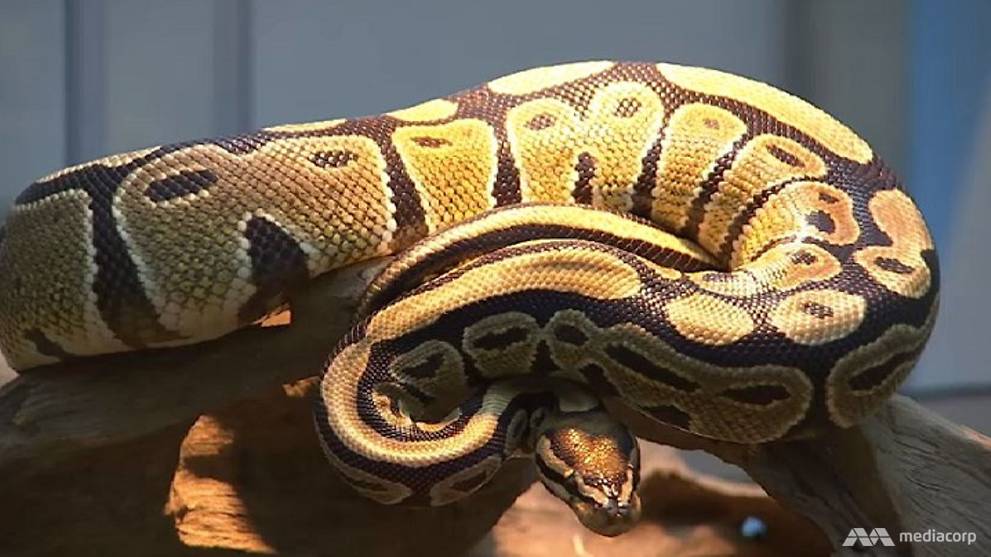 More than 100 cases of people dealing with illegal exotic pets since 2013: AVA

The ball python, which originates from Africa, is one of the most commonly seized illegal wildlife in Singapore. (Photo: Junn Loh)

But for some people, these reptiles are prized possessions worth breaking the law for so they can keep them as exotic pets.

The Agri-Food and Veterinary Authority (AVA) said it handled 105 cases pertaining to the possession, sale or trade of live wild animals seized from Singapore's borders, inland possession and online sales from 2013 to 2017.

Some of these animals are listed under the Convention on International Trade in Endangered Species of Wild Flora and Fauna (CITES), an international agreement ensuring that trade does not threaten wildlife species with extinction. Singapore is a signatory of CITES.

These animals are allowed to be kept as pets in some parts of the world, but are banned in Singapore.

The Indian star tortoise is one of the most common illegal wildlife seized by AVA. (Photo: Junn Loh)

“They have very special requirements that you can only understand if you really understand the biology of the animal,” she said. “Because it's illegal in Singapore, I think the expertise is simply not there."

They could also transmit zoonotic diseases to humans, Dr Luz added. Reptiles like snakes and lizards are known to carry the Salmonella bacteria, which can cause people to be seriously ill.

Despite its tough laws, Singapore is seen as a "country of primary concern" by wildlife trade monitoring network, TRAFFIC, in a report released last year.

"Wildlife trade in Asia is rampant and it's something that is a daily occurrence for people across Asia, even here in Singapore,” said Ms Ng.

"We're a transit hub, which basically (means that smugglers) take advantage of our connectivity and strong air and sea links,” she added.

To combat wildlife trafficking, Singapore has in place measures such as regulations, public education and industry engagement, said AVA. It also gathers intelligence and conducts investigations.

Those who violate the law pertaining to the illegal trading of wildlife could be fined up to S$500,000 or jailed for two years, or both.

"We already have very good legislation that clearly states what's prohibited, what's not. We really look forward to and urge that at some point Singapore would consider sniffer dogs programmes to make our border controls tighter,” said ACRES’ Deputy Chief Executive Anbarasi Boopal.

The use of online sites to trade wildlife illegally was another concern raised by ACRES.

“It is shocking to see the level of trade online of in general live animals and also their parts,” Ms Anbarasi said.

“There's no proper form of verification, and currently there're no regulations that control and regulate online sale … they just have the access. They don't even have to go and visit a pet shop to look for something exotic ... (that) is the worse part of the online trade,” she added.