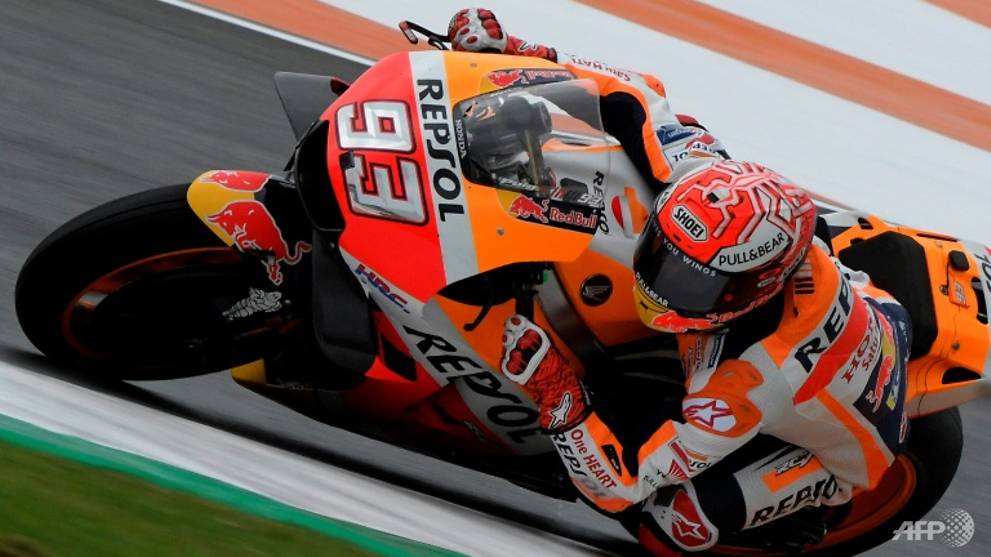 Marc Marquez was fastest in practice for the Valencia Grand Prix on Friday. (Photo: AFP/Jose Jordan)

VALENCIA: World champion Marc Marquez powered his Honda to the top of the timesheets in a rain-interrupted free practice session for the season-ending Moto GP in Valencia.

With a massive lead of 101 points on Italian Andrea Dovizioso (Ducati), Marquez has already secured the championship title ahead of the season finale.

But he signalled his bid to finish the season in style by setting a fastest lap of 1min 39.767sec in the first session, which held throughout a day plagued by delays due to heavy rain.

"The conditions were complicated," said the 25-year-old Marquez. "There was less water in the morning and the grip was good, but in the afternoon there was more water.

"There were two points where the water crossed (the track), and you had to be careful."

Ducati's Jack Miller and Italians Danilo Petrucci and Andrea Pedrosa took the next positions, with Dani Pedrosa clocking the fifth fastest time at 0.700sec on what will be his final world championship weekend before retirement.

"Yesterday there were many emotions, but you have to concentrate on the track," said Pedrosa. "In the past I have made mistakes by letting myself get too carried away in such situations."