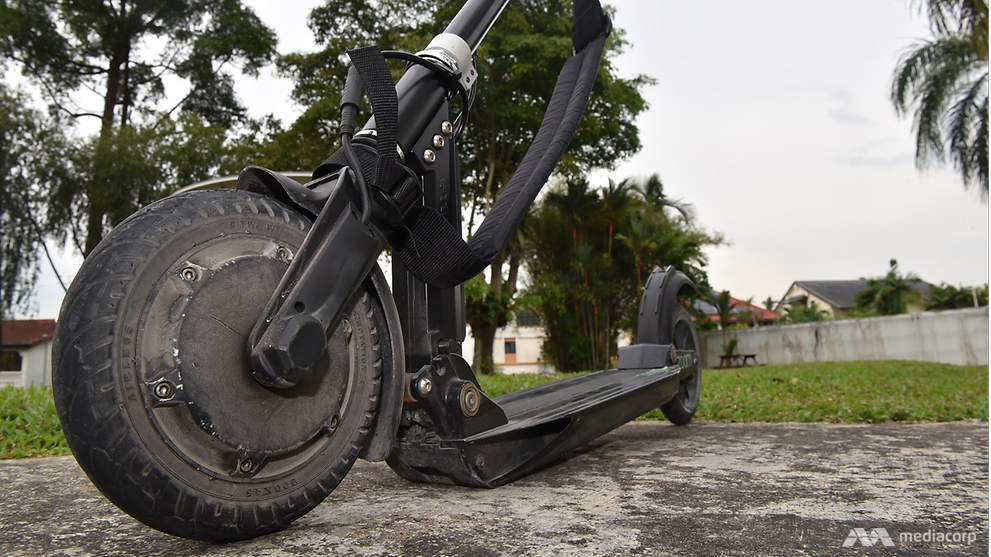 File photo of an e-scooter.

SINGAPORE: The number of fires involving e-scooters shot up to 40 last year compared with just nine such incidences in 2016 - an increase of nearly 350 per cent.

This came even as the number of calls related to fires hit a 40-year low, the Singapore Civil Defence Force (SCDF) said on Friday (Feb 9) as it released its annual fire, ambulance and enforcement statistics for 2017.

This could be because of more widespread use of e-scooters compared to other PMDs, said the SCDF, and advised users not to leave them charging unattended or overnight.

Overall, the SCDF received 3,871 fire calls last year, down 5.9 per cent from the previous year and the lowest recorded since 1978. The decrease was mainly due to fewer rubbish, vehicle and vegetation fires, the SCDF said, as it attributed the improvement to increased public education on how to prevent and mitigate such fires.

In particular, the SCDF observed a "good trend" that 25 per cent of rubbish fires were put out by members of the public before SCDF responders arrived, noting that these fires were relatively minor and were simple to put out with little risk to the public.

While the number of fires that took place in residences decreased by 5.7 per cent from 2016, 2,657 fires still took place in private and public homes- accounting for 68.6 per cent of all fires in Singapore last year.

Of these, 2,008 fires were caused by the indiscriminate disposal of lighted materials remained the leading cause.

BATTERIES MORE LIKELY TO BE CAUSE OF PMD FIRES

Experts Channel NewsAsia spoke to stressed that batteries were more likely to be the cause of personal mobility device fires.

"The chance of batteries causing fires is higher than adapters, as adapters are external and passive," said engineer Teo Chor Kok, council member of the Institution of Engineers. "When it burns, the circuit breaks. The heat may not be able to continue. Batteries store charge, so energy will keep flowing in them until the whole (battery) burns up."

In a statement, SPRING Singapore said it was working with the Land Transport Authority to review the product safety requirements of PMDs in their entirety, including batteries.

SCDF and SPRING Singapore have also produced brochures on safety tips to prevent battery fires, which are distributed at community events and to residents.