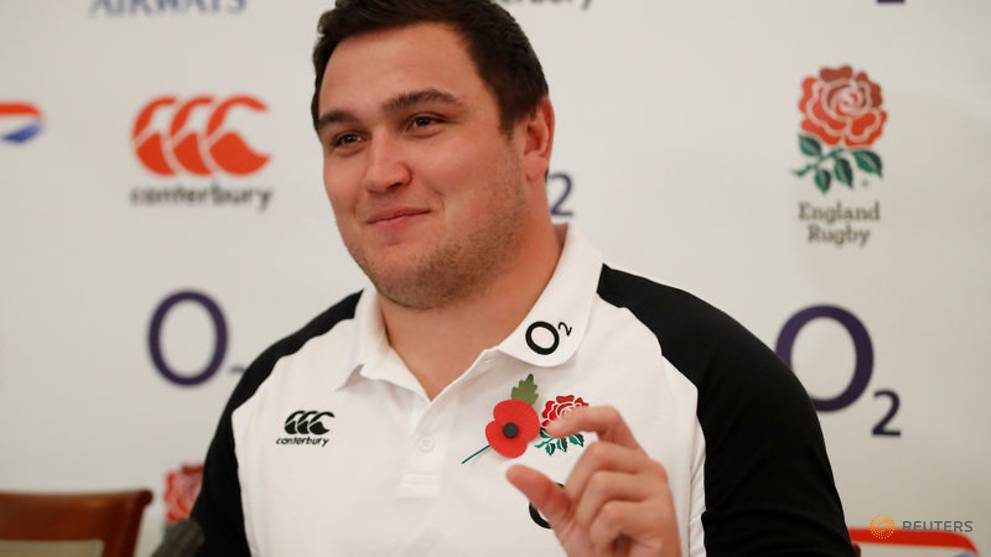 England coach Eddie Jones insists it is only the media that sustains the idea that starting a match is more significant than finishing it but world-record setting sub Jamie George is still delighted to have finally got his hands on the number two shirt when it really matters.

BAGSHOT, England: England coach Eddie Jones insists it is only the media that sustains the idea that starting a match is more significant than finishing it but world-record setting sub Jamie George is still delighted to have finally got his hands on the number two shirt when it really matters.

George will start as hooker against Australia on Saturday with the man he has sat behind for the best part of three years – co-captain Dylan Hartley – wearing the 16 that George has modelled with such aplomb.

George has 31 England caps but only six as a starter – all coming when Hartley was either unavailable or rested, including last week's against Japan.

He began his England career with a world record 17 straight replacement appearances but, though second-best in England, he was rated the best in Britain and Ireland by Lions coach Warren Gatland, who started him in all three tests in New Zealand last year.

Returning to England he was relegated back to the bench, getting his first start on his 20th appearance, but Saturday's call up is different.

"I thought this one might come up," George laughed when asked about his promotion and the whole starter/finisher debate on Thursday. "I was buzzing when I heard, really happy.

"As a competitive player, you want to be starting, but at the same time, I think Dylan's been doing a fantastic job and I've got a huge amount of respect for him.

"At Saracens I had Schalk Brits and John Smit in front of me for a long time. I've been through it before, come out of the other side of it and now I'm doing pretty well for Sarries, so hopefully it's the same thing here."

Jones said on Thursday that he thought the faster, more open start he expected against Australia would suit George and that an "arm-wrestle" finish would be ideal for Hartley.

George too accepted that Jones had done a good job in changing perceptions. "The thing that's brilliant here, and Eddie does it fantastically, is he gives us a role and we're finishers," he said.

"He's like 'you're going to come on, I need you to look at the scrum' so at halftime I'm talking with (scrum coach) Neal Hatley about how I feel the scrum is going. So I'm constantly engaged in the game and I feel a part of it.

"One to 23 you feel part of something special. Yes you want to start but the fact that you're given this responsibility... I do my job for the team."

Jones, hooker in his playing days, said he attached no blame to George for England's lineout failings during the second half of the defeat by New Zealand two weeks ago and instead opted for the collective responsibility line and a lack of cohesion.

"It's always the hooker's fault," George said with a smile when told of the comment. "It was difficult. New Zealand had four good jumpers so there were obviously a few things we could have done better.

"But I'm very confident as a lineout thrower. If you look at the statistics that's one of the best parts of my game so I can take confidence from that. One bad performance doesn't make you a bad thrower."

Having won domestic and European honours with Saracens and helped the Lions share the 2017 series in New Zealand, George, now 28, said that, for all the media interest in Saturday's switch, he was not about to start quaking in his boots at the prospect of running out on to the Twickenham turf for kickoff.

"Look, I've started a lot of games of rugby in my career, it's not a brand new thing for me," he said. "And I've started some pretty big games as well."