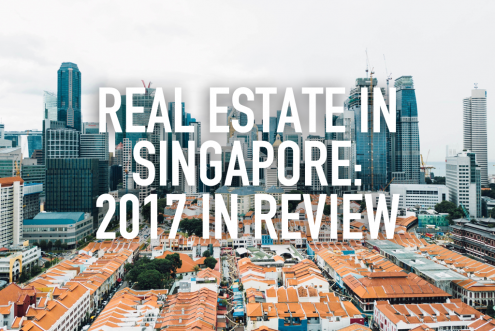 The year of 2017 has presented itself as an interesting year for the Singapore real estate market; full of developments that have shaped a rather rapid recovery across various sectors. One of the most prominent developments can be said to be changes in the cooling measures in March 2017 that has seemingly been relaxed.

Other significant events in the industry include en bloc fever which has been going on from May onwards, a rise in the PPI (Property Price Index) for private residential properties, mergers of major real estate agencies, an influx of foreign investors and developers as well as an interest rate war amongst major mortgage providers. As such, this article will provide an overview of these major aforesaid developments, as well as an insight going forward to the next year of 2018.

In March 2017, the government decided to make some amendments amongst the existing property cooling measures in place. As such, the more significant and notable changes are as follows:

TDSR According to the Government, they have received feedback from some borrowers that the TDSR framework has mitigated their flexibility to monetise their properties in their retirement age (for instance, to borrow against the value of their properties to obtain additional cash). Thus, changes were made to relax the measure – the TDSR framework is no longer applied to mortgage equity withdrawal loans with loan-to-value ratios of 50% and below.

SSD Previously, the SSD was payable by those who sold their residential property within 4 years of purchase, with rates ranging from 4% to 16% of the property’s value. However, the number of sales transacted within the 4 years window has dropped significantly since the introduction of this measure. As such, the government has decided to revise the SSD as follows:

Impose SSD on holding periods of up to 3 years, a reduced figure from the current 4 years

Lower the SSD rate by four percentage points for each tier. The new SSD rates will range from 4% (for properties sold in the third year) to 12% (for those sold within the first year)

Henceforth, these new SSD rates have been applied to all residential properties transacted on and after 11 March 2017.

As such, owners of residential property-holding entities (PHEs) are liable to pay for the usual stamp duties when they transfer equity interest in such aforesaid entities, going through the same process as if they are purchasing or selling the properties directly.

As of mid-December 2017, the real estate market industry has seen several successful collective sales over the past few months. The total value of en bloc sales has hit S$6.1 billion and is expected to continue throughout the year. Waves of optimism have spread throughout this sector, as the bullish sentiments can be said to be a mark of a turnaround for the otherwise slumping property market previously. The table below depicts the successful en-bloc sales transacted over the past few months:

As mentioned earlier, we can expect the ‘en bloc fever’ to continue over the next few months, as the residential market continues to pick up and the rate of unsold units has dropped considerably. Simultaneously, the reduction in the supply of GLS (Government Land Sales) may result in developers having to turn to en bloc sales for the development of their new projects. As such with a combination of optimistic sentiments, a healthy demand and a lack of supply – we can expect more en bloc sales over the short to mid-term.

Notwithstanding the aforesaid cooling measures and en bloc fever, the latest private residential PPI (Private Property Index) has also depicted a moderate recovery phase in prices for the private residential market. According to the latest figures from URA (Urban Redevelopment Authority), the PPI for private residential properties has increased by 0.7% in the 3rd quarter of 2017, surpassing URA’s initial flash estimate of 0.6%.

As depicted by the prices above, it is imperative to note that this may actually represent a recovery for the private residential market – a sentiment shared by several market watchers and also backed by a healthy demand. Concurrently, the rental prices of private residential properties have also halted a 2-year long consecutive decline, remaining unchanged despite a 0.2% decrease in Q2 2017. It remains to be seen whether this will indeed indicate a consecutive recovery phase in the market, although with the current market fundamentals, we can expect that this will be the likely scenario over the short to mid-term.

The return of foreign buyers and investors

The previous sections were not the only indicators of a possible recovery phase; in fact, another positive indicator would be the return of foreign homebuyers and investors into the market.

In terms of home buying, according to URA, purchases by foreigners have increased by 48% in the first half of 2017 on a year-on-year basis, with a 32% increase made by Permanent Residents (PRs) as well during the same period. Chinese, Malaysian, Indian and Indonesian buyers have been mainly purchasing properties with values in the range of $500,000 to $1 million, with more Indonesians purchasing premium properties with values of $3million onwards. Americans are also big foreign spenders on Singapore’s residential properties, with the majority of the transactions consisting of properties valued between $1million to $1.5 million.

On the other hand, on the developers’ side, Chinese developers have been extremely aggressive in land sales in Singapore this year. In May this year, Nanshan Group and Logan Property, buying a plot of land along Stirling Road for about $1 billion, which set an all-time record for GLS.

On top of that, another aggressive China-based developer, Qingjian Realty, has also been ruthless in their bids for Singapore land plots. They now own 10 developments in Singapore, but still behaved aggressively this year when they bought Shunfu Ville for $638 million, and successfully won with a bid of $301 million for Bukit Batok West Avenue 6 site just the week after. Another notable incident would be in June 2017, where a Chinese consortium bid $75.8 million for a plot at Lorong 1 Realty Park, representing a price 22% higher than the next top bidder that was also a fellow Chinese consortium.

As such, we can expect a further similar trend over the short to midterm horizons as well, as Chinese property developers continue their global push and aggressive presence in the real estate markets, and especially in Singapore where supply is limited and the market is in its recovery stage.

Another notable occurrence in the market this year would be the unprecedented 3 mergers of major real estate agencies in Singapore. In June 2017, two of the largest agencies, Propnex Realty and Dennis Wee Group (DWG) decided to merge thus making them a combined entity that is Singapore’s largest real estate agency with more than 7,000 salespersons. In August, SLP and Scotia announced that they would combine to form SLP Scotia, and days later, OrangeTee and Edmund Tie & Co also announced a merger, thus forming OrangeTee & Tie.

The main reason for the mergers could be attributed to the need to capitalise on economies of scale. Despite the positive sentiments in the property market, the mergers indicate that times are challenging the property brokerage industry at the back of an increasing disruption caused by the rise of property technology. DWG’s offloading of shares was due to the fact that they were shifting their focus on property development, investments, and valuation. SLP Scotia will receive a $3 million cash injection, and whether this may be used for investments in technological platforms remain to be seen, for they have already begun investing heavily in next-gem platforms and moving into virtual spaces. As such, these mergers indicate that besides a recovery phase, the Singapore property market is gradually preparing for a major change in technological advances.

A mortgage war has also begun amongst 3 major banks in Singapore: DBS, HSBC, and UOB. This could also further stimulate the already recovering demand for residential properties in Singapore for the foreseeable future. In early September, UOB and HSBC joined DBS, the nation’s largest housing provider, with announcements stating that they have launched three-year fixed rate home loan packages of 1.68%. This was generally done in view of taking advantage of the blip in interest rates as well as scepticism of any further interest rate increases by the US Federal Reserve for the foreseeable future.

This mortgage war is expected to be a heated one, as currently private home transactions are at its highest level since 2013. As such, the increased demand for residential sales means an increase in demand for mortgage loans, as proven by MAS’ (Monetary Authority of Singapore) latest data on housing and bridging loans. The report states that about $77.9 million worth of new bridging loans limits was granted in Q2 2017, a significant increase from merely $49 million from the previous quarter. At the same time, limits granted for outstanding housing loans of owner-occupied properties have increased from about S$161 billion to S$164 billion in Q2 2017. Furthermore, this competition also represents an opportunity for the banks to capture market share amongst the return of high-end foreign individual investors and homebuyers in the Singapore market.

Riding on this increased competition, in early October 2017, OCBC introduced its latest home loan package called the OCBC Home Rate (OHR). The OHR is set at 1%, derived from the long-term average of 1-month and 3-month SIBOR over the last 12 years. The OHR is proving to be an extremely competitive alternative as well, as depicted by its packages indicated below:

As such, it is undeniable that 2017 has been an eventful year for the Singapore property market, especially so within the residential sector. The overall theme can be said to be ‘rapid recovery’ which we can expect to be continued through 2018 as well. The rise of property technology is one that should be watched as well, as companies prepare to either utilize or combat this fresh yet increasing trend. Going forward, it seems that 2017 marks the start of more interesting developments for the foreseeable future.