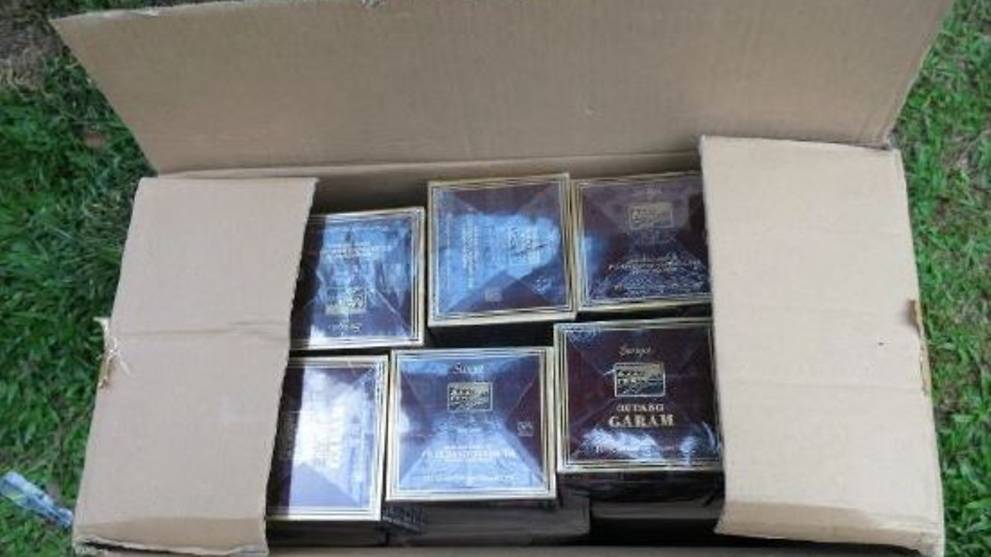 Tong Chye Heng was arrested on Dec 5, 2017 while transferring a box containing duty-unpaid cigarettes from his van to a car in a car park in Jurong West Street 41. (Photo: Singapore Customs)

SINGAPORE: A 58-year-old Singaporean man has been sentenced to 50 months’ jail and given a S$11 million fine for dealing in duty-unpaid cigarettes, the Singapore Customs said in a press release on Tuesday (Feb 27).

Another five charges were taken into account in the sentencing on Feb 26.

As Tong did not pay the court fine, he will serve another 31 months of default imprisonment, bringing the total jail term to 81 months.

As a repeat offender, Tong is liable to an enhanced punishment under the Customs Act, which includes a mandatory jail term of up to six years, as well as a heavier fine of at least 30 times the duty or Goods and Services Tax (GST) evaded.

Tong has been sentenced on four occasions since 1998 for committing customs offences.

Tong Chye Heng was arrested on Jun 2 for storing 2,926 cartons, 370 packets and 43 sticks of contraband cigarettes in a farm in Sungei Tengah Road (top row, left) and in a commercial building (bottom row,left) in Soon Lee Street. (Photo: Singapore Customs)

On Jun 2 last year, Tong was caught again for storing 2,926 cartons and 370 packets and 43 sticks of duty-unpaid cigarettes in a farm in Sungei Tengah Road and in a commercial building in Soon Lee Street. He was charged on Jun 3.

However, while out on bail, he was nabbed in a car park in Jurong West Street 41 during a Singapore Customs operation on Dec 5 last year.

A follow-up raid on Dec 7 at a unit rented by Tong at an industrial building in Eunos Avenue 3 uncovered an additional 624 cartons and 469 packets of duty-unpaid cigarettes. (Photo: Singapore Customs)

Singapore Customs officers followed up with a raid on Dec 7 at an industrial building in Eunos Avenue 3. In a unit rented by Tong, the officers uncovered an additional 624 cartons and 469 packets of duty-unpaid cigarettes.

The total duty and GST evaded for the duty-unpaid cigarettes seized in the operations on Jun 2, and Dec 5 and Dec 7 last year amounted to about S$377,150 and S$27,330 respectively.

Buying, selling, conveying, delivering, storing, keeping, having in possession or dealing in duty-unpaid goods are serious offences under the Customs Act and the GST Act, Singapore Customs said in the release.

Offenders can be fined up to 40 times the amount of duty and GST evaded and be jailed for up to six years.

Repeat offenders who are caught with more than 2kg of tobacco products will also face mandatory imprisonment. Vehicles used in the commission of such offences are also liable to be forfeited.