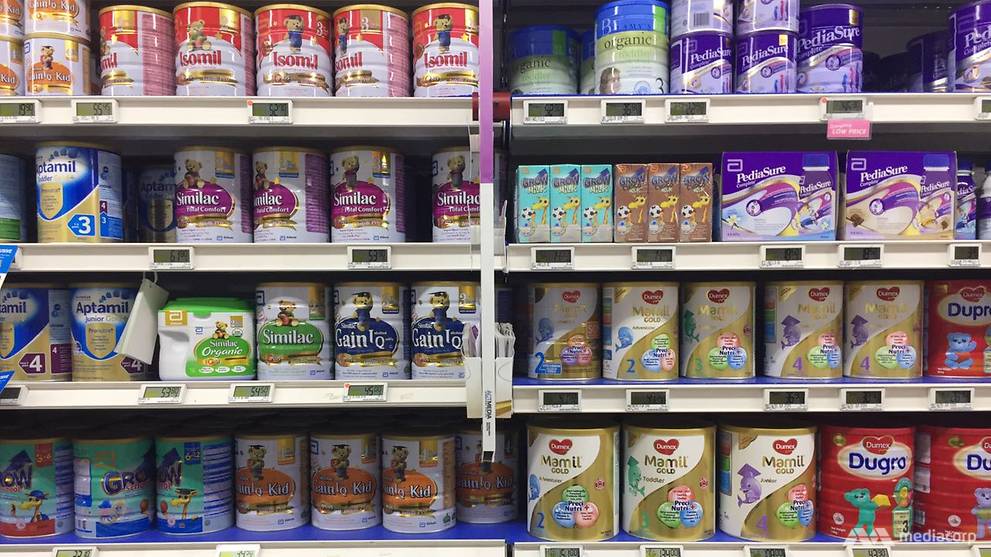 SINGAPORE: The average price of infant formula milk powder has dropped 4.8 per cent since May last year, Senior Minister of State of Trade and Industry Koh Poh Koon said on Thursday (Feb 8).

He said this in the first formal update since chairing a taskforce to look into high prices of formula milk that came into the spotlight in March last year.

The price of formula milk catering to babies up to six months old has dropped 13 per cent. Formula milk for those aged six to 12 months is 9 per cent lower, and for children aged one to three years, has fallen 5 per cent.

Dr Koh was referring to Nielsen retail data, which looked at average formula milk prices in November last year in comparison to prices in May.

A survey last year showed that that the average price of a 900g tin of infant milk powder in Singapore had soared 120 per cent over the last decade to more than S$50.

The Government then set up a task force to look into tightening regulations on labelling and advertising, facilitating imports of more formula milk options, strengthening public education, and encouraging good practices in hospitals.

In May last year, Dr Koh said in Parliament that the Government is working to make more formula milk options available.

On Thursday, he said there are now five affordable brand options costing less than S$35 for infants aged below 12 months, up from two in May last year.

He added that the Food Regulation will be amended to help curb excessive marketing and allow better competition on price instead of on health or nutrition claims.

The amendments will prohibit health claims, nutrition claims, texts and messages that idealise the use of infant formula, and mandate a statement on the superiority of breastfeeding.

For example, he said that claims of formula milk having calcium and iron will be forbidden as such nutrients are ubiquitous across brands.

Surveys conducted by the Health Promotion Board showed that between July and September last year, there was an increase in the proportion of mothers who intended to switch from formula to whole cow's milk, from 43 per cent to 62 per cent .

The proportion of mothers who are aware of the appropriate age to introduce solids to their child also increased from 49 per cent to 71 per cent.

The proportion of the respondents who are aware that all formula milk in Singapore contains sufficient nutrition for their baby also increased about 10 percentage points.

The increase in awareness has translated to tangible shifts in consumers’ purchasing patterns of formula milk, Dr Koh said.

Between May and November last year, the total sales of formula milk decreased by about 17 per cent.