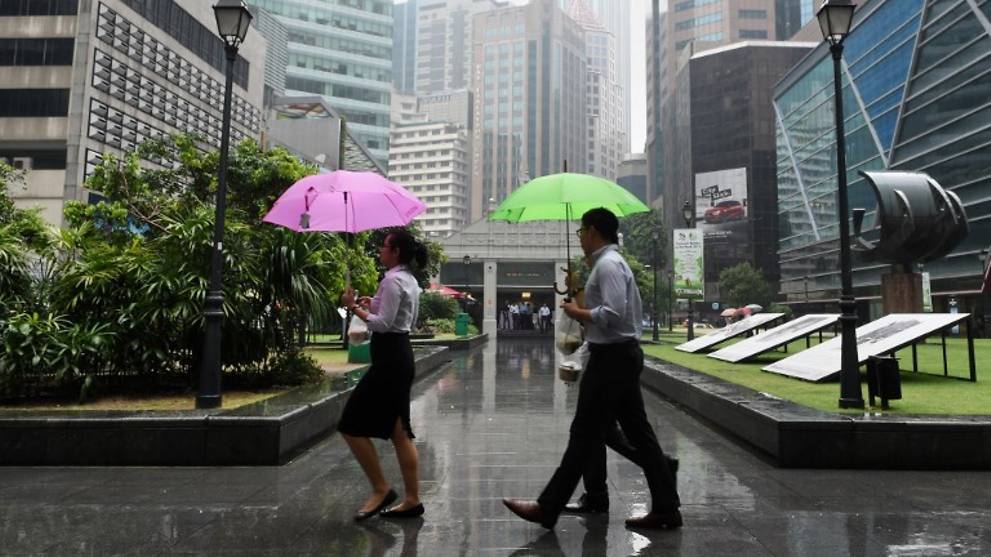 Temperatures in Singapore dip below 22°C amid rainy season

People walk under umbrellas in the rain in the financial district in Singapore. (Photo: AFP/Roslan Rahman)

SINGAPORE: The weather in Singapore was chillier than usual on Friday (Jan 12) as the National Environment Agency (NEA) warned of a monsoon surge affecting the South China Sea and its surrounding region.

Temperatures in Ang Mo Kio and Pulau Ubin dipped below 22°C, while other parts of Singapore also experienced temperatures of below 23°C, according to data from the Meteorological Service Singapore at 7.07am.

The weather was chillier than usual on Friday (Jan 12). (Graphic: Meteorological Service Singapore)

NEA forecast on Wednesday that the monsoon surge will persist over the next few days, during which windy conditions with periods of moderate to heavy rain, at times with thunder, are expected over Singapore.

Temperatures are expected to range between 22°C and 28°C during this period.

It has been cool and wet over the past few days, with the heavy downpour causing flash floods in parts of eastern Singapore on Monday. In the Kim Chuan Road area, about half of Singapore's average monthly rainfall in January fell in just four hours.

On Thursday, the mercury fell to 21.9°C in Ang Mo Kio and Admiralty at 10.30pm, according to the Met Service.

THE BEST THING OF LIVING IN SINGAPORE IS WE DON'T HAVE TO SPEND MONEY ON WINTER CLOTHES NO MATTER HOW COLD IT IS.😂