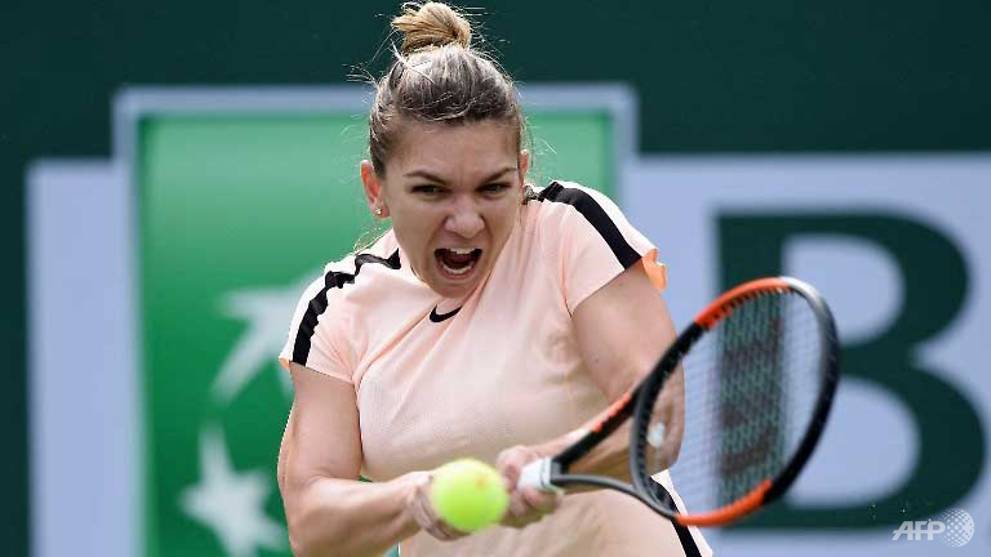 INDIAN WELLS: World number one Simona Halep cruised past Wang Qiang of China 7-5, 6-1 in the fourth round of the WTA Tour's Indian Wells tournament on Tuesday (Mar 13).

Halep, who is one of two former champions left in the draw, is now 17-1 on the season having already won a title in both singles and doubles at Shenzhen, China.

Halep advances to the quarter-finals where she will face unseeded Petra Martic of Croatia who beat Czech Marketa Vondrousova 6-3, 7-6 (7/4).

Halep needed just 76 minutes on the main stadium court to dispatch her practice partner Wang as she won 64 percent of her first-serve points and broke Wang's serve seven times.

Halep said she is happy with the way she is playing at this stage in the tournament.

"I wasn't missing that much," she said. "I dominated a little bit more."

"I knew it would be like that because we practised a few days ago and she beat me in practice," Halep said.

Halep and second seed Caroline Wozniacki have taken turns being No. 1 this year with Wozniacki grabbing it after beating Halep in three sets in the Australian Open final and Halep winning it back just prior to Indian Wells.

Wozniacki takes the court in Indian Wells later in the day when she faces 20th seeded Russian Daria Kasatkina.

World No. 55 Wang is third highest ranked player in China behind Peng Shuai and Zhang Shuai.

Wang was the last Chinese player standing in the California desert, having achieved a career best result in Indian Wells by reaching the round of 16.