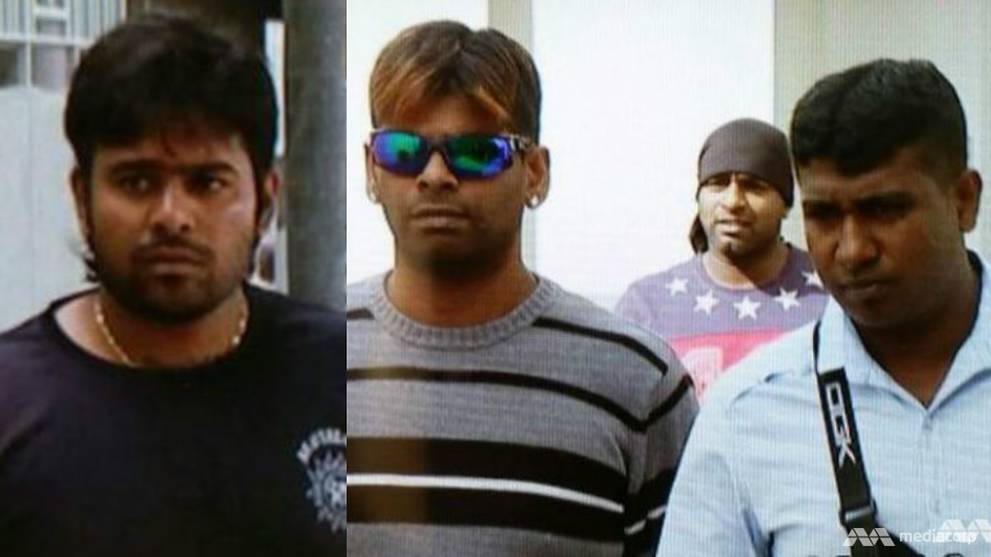 Trio who scuffled with police during Thaipusam in 2015 convicted

SINGAPORE: Three friends who scuffled with police during the Thaipusam procession three years ago were on Friday (Feb 2) convicted after a 13-day trial.

Ramachandra Chandramohan, 35, Gunasegaran Rajendran, 36, and Jaya Kumar Krishnasamy, 30, were convicted of seven, two and three charges respectively. The men created a ruckus on Feb 3, 2015, after police officers pulled the music troupe they had hired out of the procession.

The playing of musical instruments was banned at all foot processions, including religious events. The ban had been in place since 1973 until authorities relaxed the rule in late 2015 following feedback from members of the community.

On Friday, District Judge Kessler Soh acknowledged the trio’s unhappiness at the “rough, loud and rude” way they thought the police had treated them.

“You felt you were not being treated sensitively, considering that this was a religious procession. You felt manhandled,” Judge Soh said.

However, the judge found that the officers involved had not behaved hard-handedly or unprofessionally. “They were there to maintain public order … and had in fact tried to diffuse the situation and calm things down,” he said.

In the chaos of it all, Ramachandra and Gunasegaran had “overreacted”, the judge added.

When police officers stepped in to tell the urumi troupe, or Indian drum players to stop their live performance, Ramachandra and Gunasegaran became upset.

They had hired the troupe to support Gunasegaran’s brother, who was carrying the kavadi.

Footage from police cameras showed that the duo became aggressive. They “shouted at top of their voices and gesticulated wildly with their hands”, Deputy Public Prosecutor Houston Johannus said, adding that they turned violent when officers tried to arrest them.

Footage played in court at the men’s trial in 2016 showed a chaotic scene of devotees in protest and a heavy police presence at the junction of Serangoon Road and Desker Road, where the incident happened.

At one point, the police were forced to form a human barricade in an attempt to control the crowd.

The men’s friend, Jaya Kumar Krishnasamy, tried to breach the human barricade to stop officers from arresting his friends and taking them away in a police van. He was also arrested.

Ramachandra was convicted of seven charges, including three for assaulting three policemen, two for hurling vulgarities at an officer and one for disorderly behaviour.

Both he and Gunasegaran were also convicted of deliberately wounding the religious feelings of a Muslim officer by insulting Allah.

Jaya Kumar was convicted of three charges - one for disorderly behaviour, one for verbally abusing a police officer and one for obstructing an officer in the discharge of his duty.

The prosecutor had said at a previous hearing that the incident occurred amid a “sensitive and explosive mix of factors prevalent at the material time”.

“The incident had occurred in the midst of a religious festival, (and) the disorderly behaviour was displayed in defiance of police authority ... just over a year after the Little India riots in 2013,” he noted.

The prosecutor will make sentencing submissions before the judge on Mar 6.

For disorderly behaviour, the men could face up to one month in jail or a fine of up to S$1,000.

For assaulting the three policemen, Ramachandra could be jailed for up to seven years and fined or caned.

For wounding the religions feelings of the Muslim officer, Ramachandra and Gunasegaran could face up to three years' jail, a fine or both.

For verbally abusing the police, Ramachandra and Jaya Kumar could face up to 12 months' jail and a fine of up to S$5,000.