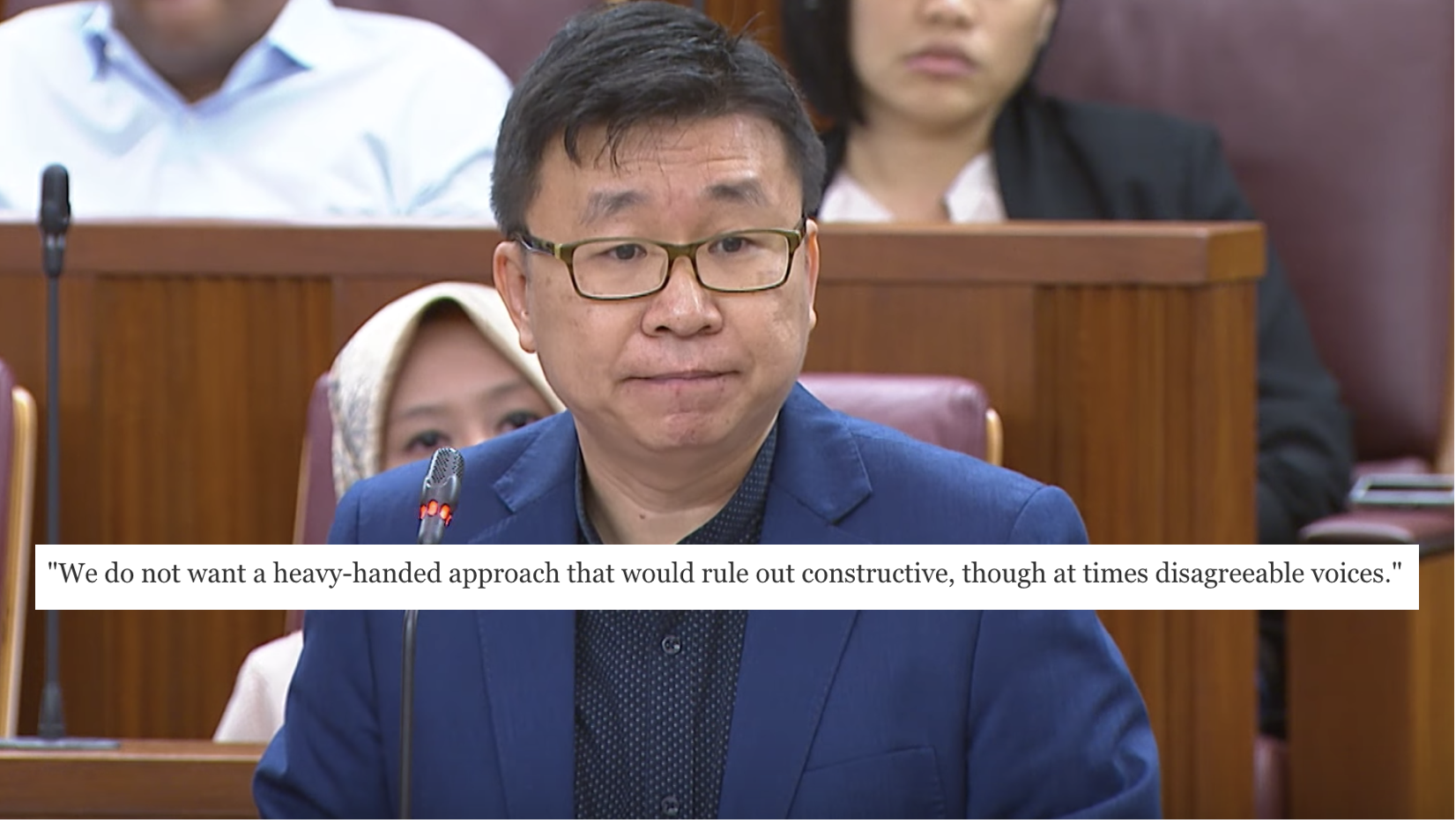 The Committee of Selection announced the names of the 10 MPs who will take part on Jan. 11. We analysed what each member brought to the table, which you can read in the article below.

“Countries across the world have been the subject of organised, deliberate disinformation campaigns, conducted both by state actors, many state actors targeted at destabilising other countries, and also non-state actors.

And they spread the falsehoods deliberately, both to interfere with the democratic processes within countries, and to also destabilise and undermine institutions within a specific country.”

a non-online example of foreign interference in our media.

He referenced the case of The Eastern Sun, which was exposed by the Government for receiving HK$8 million from a Communist intelligence agency in return for not opposing the People’s Republic of China on major issues.

A note of concern

While supportive of the motion, NMP and theatre veteran Kok Heng Leun raised a number of concerns that are worth looking at more in-depth.

1. Difference between falsehoods and errors?

He began by saying that the Select Committee should not focus on errors made when one party has an honest belief in the facts, but instead on deliberate, malicious falsehoods.

He mentioned that in the UK, , and one comment stuck with him.

“Where does biased but legitimate commentary shade into propaganda and lies?”

Kok mentioned that as the Government has advocated for a more active citizenry, with more Singaporeans speaking up through online platforms, it should take care not to silence dissenting voices.

“We do not want a heavy-handed approach that would rule out constructive, though at times disagreeable voices.”

Enabling individuals to have meaningful discussions, including on government policies, without fear of having action taken against them.

Enabling the media, both professional and citizen journalists, to report on such issues of concern.

He described a possible “responsible journalism” defence, where a media outlet could be free from liability if it made efforts to establish whether an incident did take place, such as contacting the authorities.

If it later turns out to be inaccurate, the media should therefore not be blamed. He also questioned if the media should be responsible if it merely reports what someone says without endorsing it.

3. Existing laws as a starting point

Kok invited the Select Committee to look at existing laws related to the communication of falsehoods as a starting point, such as the:

The Real Singapore, which in Feb. 2015 published a false article about a Filipino family complaining about the noise from a Thaipusam procession involving Indian Singaporeans.

Kok acknowledged the Government’s effective response, but argued that as the matter was dealt with so swiftly, it demonstrates that current laws and existing provisions have been effective in dealing with fake news.

Kok said that while the current laws might not be perfect, they do give the authorities broad powers, and perhaps they should be reviewed instead of introducing new laws.

He added that citizens themselves needed to be more responsible and improve their media literacy:

“Hence (in) this age of social media, the people’s responsibility then must include the ability to discern and make up their mind what news are dubious and what are falsehoods.”

4. Recommendations for the Select Committee

Kok then had some suggestions for the Select Committee to keep in mind while it deliberates the issue.

As fake news preys on confirmation bias, a high level of transparency from the authorities is important to clear the air.

Look at setting up multiple independent fact-checking bodies to allow the public to cross-reference and make their own decisions.

Provide sufficient time for the public to weigh in.

Kok’s points were a refreshing change of pace. Let’s hope the Select Committee takes his words to heart.

You can view his speech below.