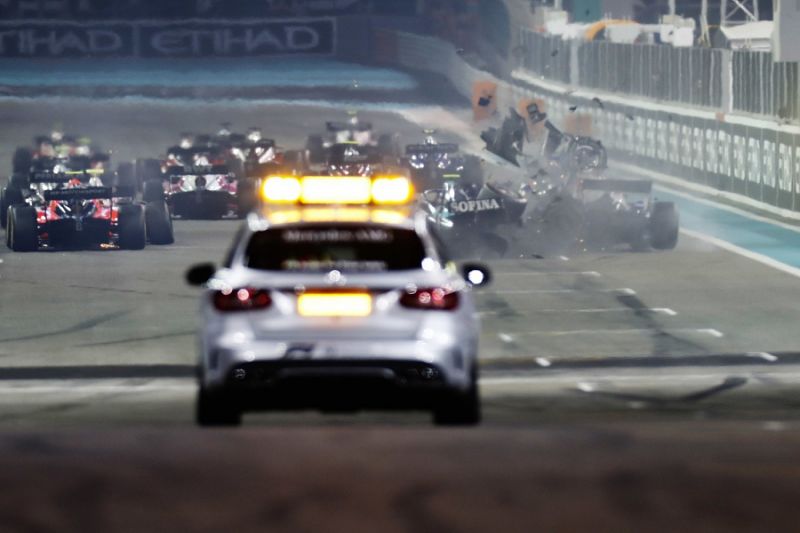 Williams Formula 1 recruit and new Formula 2 champion George Russell has called on the series to improve its car's start procedure for 2019.

Nicholas Latifi stalled from third on the grid and was hit at speed by 19th-place starter Arjun Maini, causing a large crash that forced the FIA's Charlie Whiting to duck to avoid debris from the race directors box.

Both drivers were released from the medical centre unharmed, with Maini praising the strength of the Dallara chassis.

Prior to Abu Dhabi, the series had gone eight races without a stall.

"I actually saw the incident or the aftermath while I was driving round, on the TV screens, and it was clear what had happened," said Russell.

"I was actually frustrated. We're at the highest level below Formula 1 and yet the start procedure in this car is absolutely woeful.

"It's a gamble every single time. "I have huge sympathy for the guy who stalled and the guy who crashed because it's not their fault.

"You toss a coin and you hope for a good start.

"This is something that absolutely has to change for next year. It's unacceptable."

F2 introduced a new car for 2018, complete with a turbocharged engine and a halo.

The clutch was a problem for much of the first half of the year - it had a very small operating window, and many drivers experienced a technical problem that meant the clutch would not engage to the amount requested by the driver.

The series has introduced software updates through the year, but at the Red Bull Ring in July the FIA mandated rolling starts for that F2 round and the following event at Silverstone while the issues were rectified.

A new clutch basket and diaphragm were introduced at the Hungaroring in late July and there have been fewer stalls since, with the FIA's Charlie Whiting labelled the issues "history".

Autosport understands F2 brought an update related to revs for this round. F2 officials initiated a meeting with teams after the Abu Dhabi feature race to explain that the hot conditions could make starting the car more difficult.

The heat made the asphalt warmer and stickier, meaning cars struggled to gain traction more and were likely to suffer more wheelspin.

F2 reverted to the pre-update version for Sunday's race as a precaution, but Latifi and Sette Camara stalled again.

Both teams are still analysing data.