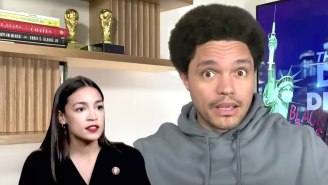 Millions of Texans remain trapped in freezing cold homes without power after a historic winter storm blanketed the region with snow and ice. But just because it was a once-in-a-generation event doesn’t mean that officials shouldn’t have been prepared.

“The main reason Texas has plunged into darkness is that its natural gas industry has been crippled by this storm. And that might, might have been preventable, except that Texas deregulated its power supply in the ’90s, which was clearly not the smartest decision,” The Daily Show host Trevor Noah said during Wednesday’s episode. It has very little to do with frozen wind turbines, no matter what Governor Greg Abbott said (he has since walked back those comments) and Fox News continues to say. It also has nothing to do with the Green New Deal and (sigh) Alexandria Ocasio-Cortez.