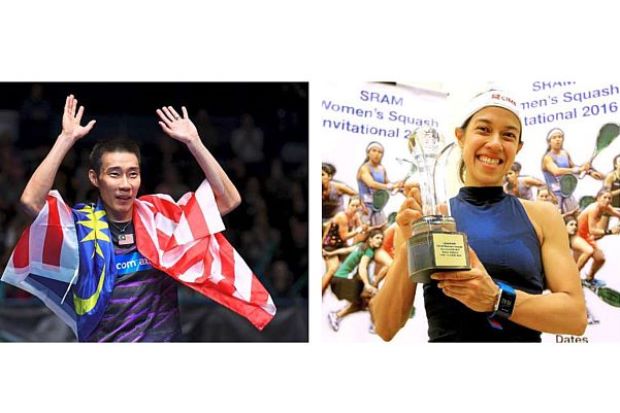 An inspiration to youngsters

Level up with Ritchie Creative Design! You decide your salary
Spice World hot pot at under $20?! Only with this promotion in June!

THE two icons in their respective sports – Datuk Wira Lee Chong Wei and Datuk Nicol David – have called time on their glittering career.

While squash queen Nicol has made her intention clear in February before officially retiring at the British Open in May, Chong Wei’s retirement came as a shock last month.

His mind is willing, but not his body after the nose cancer treatment.

Obviously, he has some unfinished business – to win the elusive World Championship and Olympics titles after dominating the badminton arena for years.

For umpteenth times, we were proud of seeing the Jalur Gemilang flying high, and listening to the Negaraku being played at major sporting events, thanks to these two legends from Penang.

And both of them had also dominated the Sportsman and Sportswoman awards, be it at state or national level for many years.

The nation would have seen the first Olympics gold medallist, if squash had been added to the Olympics.

I still remember the semi-final match between Nicol and Egyptian Nour El Sherbini at the Penang-CIMB 29th Women’s World Squash Championship in 2014.

Like thousands of Penangites out there, we expected to see her lift her eighth world championship title in her hometown.

With the home crowd rooting for her, Nicol was her usual confident self, smiling and waving to the crowd before the match began.

But the Egyptian was not overawed by the occasion. In the end, we walked out of the Setia SPICE Arena dejected.

At the 2016 Rio Olympics, Chong Wei was in tears on the podium with his third silver medal.

But one thing is for sure. These two icons always have the ability to unite the various races who watched the games in coffee shops and open spaces, cheering for them.

We shared their joy and agony.

Behind every success, there are always stories of determination, true grit, sweat and tears.

In sports, it’s tough to be at the top all the time.

We have seen many one-time wonders, those who win a championship but struggle to maintain their good runs.

After their exploit at the All-England where they finished second in March, the duo have struggled to impress since.

When you are at the top, everyone will be aiming for your scalp by studying your game.

It takes a lot of hardwork to add variety into your game, coupled with good mental strength and physical fitness level to remain in tip-top condition.

And clearly, both Chong Wei and Nicol had been there, done that.

Sport, as they say, is a cruel game. The recovery rate is slower as you grow older.

Many his age would have called it a day, but clearly Chong Wei was still at the top of his game before being hit by cancer.

Discipline could have played a part in his longevity in the sport.

It has been reported that Chong Wei had to be up by 5am every day for his routine exercises and sessions on court.

And his coach Datuk Misbun Sidek said it was a joy to guide him as he always showed the right attitude in training and had the strong desire to become a champion.

Former national doubles shuttler Lee Wan Wah, who is now the national junior coach of the Nippon Badminton Association, said it was vital to practise strict self-control and self-discipline.

He said the Japanese players would not dare to take a drink if the coach did not tell them so.

But when Malaysian players are tired, they tend to take a break to sip water. Japanese players have to wait for the coach’s green light.

Wan Wah was quoted in a news report as saying he could not fathom why they were not allowed to drink despite being tired.

“I thought that was too harsh.

“But as I grow more mature, I began to see the reason behind it. The Japanese coach wants to toughen up their players mentally,” he told Buletin Mutiara in an interview.

While we have seen the badminton icon’s biopic movie – Lee Chong Wei: Rise of the Legend, and his non-fiction book ‘Dare to be a Champion’, I hope to see the same coming from Nicol.

She has debunked the myth that sports and studies do not mix by scoring 7As in both SPM and PMR examinations.

A shining beacon like her could easily win the trust of the parents to encourage their children to take up sports.