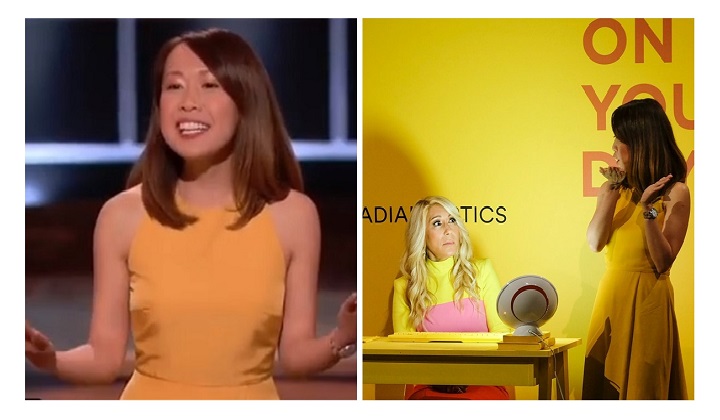 Many here would have heard of ‘Shark Tank’, the no-holds-barred US TV show where budding entrepreneurs pitch their businesses to potential investors or “sharks” in hopes of finding success.

In the “shark tank”, the hopeful entrepreneurs either make it or break it as their business models and products are scrutinised by investors who then decide if it’s worth their money.

It’s a nerve-wracking situation to be in for sure, but one Malaysian woman managed to swim with the sharks and emerged unscathed.

In fact, the KL woman just became the FIRST Malaysian to be featured on the show AND she walked away with a US$800,000 (RM3.36 million) deal!

Calling herself “a girl from a small town in Malaysia”, Amber Leong who hails from Salak Selatan is the founder of Circadian Optics, a light therapy device that mimics the sun to help regulate the body’s circadian rhythm. Hence, improving sleep.

While the sun mimicking device impressed the investors, they were also moved by her journey from a poor childhood to starting a multi-million-dollar company with her husband Kin Mun Chew.

With visions of Full House in her head, Amber dreamed of a life in the US. So, she convinced her parents to send her across the Pacific Ocean to attend college.

Her parents took out their retirement funds and borrowed money from friends to send the starry-eyed lass to America.

Unfortunately, 9 months into her American dream, Amber was diagnosed with toxic shock syndrome– a rare and dangerous condition caused by severe bacterial infections.

Doctors told her that she only had a 50% chance of survival.

However, Amber survived and thrived. Pulling through the life-changing episode, finished her studies and landed a 6-figure salary job, sending money to her family back here in Malaysia.

“I survived and it gave me a new perspective in life. It made me ask myself: “What am I going to do with my one wild and precious life?” I want to do something courageous. I have to take a chance! So, I had this idea and I wanted to choose creativity over certainty.”

Her miraculous recovery drives and motivates her every single day. She then started Circadian Optics in 2016 after discovering that light therapy lamps helped her overcome her disrupted sleep patterns.

Amber’s spark had the investors teary-eyed as well.

“You represent to everybody around the world who watches this show that it doesn’t matter where you come from, if you put your mind to it, anything is possible.”

In exchange for the RM3.36 million investment, investors Mark Cuban and Lori Greiner will get 20% ownership in the company.

What an inspiring story! TRP wishes Amber great success with her company and we look forward to hearing more from her.

Watch the Amber relay her story on Shark Tank in the videos below: