Get your USS Halloween Horror Nights 9 tickets at a special price!
Looking for professional and affordable room painting? Here it is! 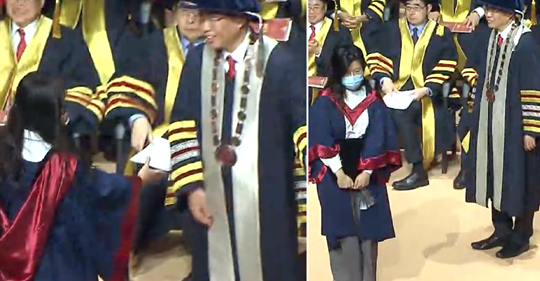 Footage showed Teng Jinguang, the university president, stepping back from the two female graduate students who reached out to shake his hand.

Instead of shaking hands with the two students like he did with the others, he moved away and gestured at them to leave the stage.

Early in October, Hong Kong leader Carrie Lam announced a law banning face masks, arguing that the law can “create a deterrent effect against masked violent protesters and rioters, and will assist the police in its law enforcement.”

Teng delivered his speech during the graduation ceremony and described how the series of protests “caused much worry” among the people of Hong Kong.

“At a time we are dispirited by the divisions in our society, let us also take heart and reference from what university education provides, including expressing views in a respectful and rational manner, embracing diversity and the perspectives of those from backgrounds different from ours, and observing others’ rights and our own responsibilities,” he said as quoted in a report by the South China Morning Post.

Student activist groups encouraged the graduates to wear masks in solidarity of the democratic cause, but university staff allegedly reminded the graduates not to do so in order to “show respect” to the “solemn and grand” graduation ceremony.

One of the students who wore a mask onstage said that it was ironic for Teng to talk about “embracing diversity” when he could not bring himself to “accept different view from the graduates.”/TISG