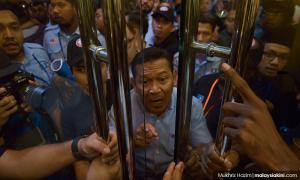 Scuffles and arrests at PKR Youth meet, and 9 news from yesterday

KINI ROUNDUP | Key headlines you may have missed yesterday, in brief.

1. The PKR Youth congress kicked off with several rounds of scuffles that led to two being arrested and another two injured. Party president Anwar Ibrahim wants the rabble-rousers sacked.

2. Over at the PKR Women’s wing congress, the wing’s chief spoke of rapprochement between the party’s rival camps and said Pakatan Harapan’s defeat at the Tanjung Piai by-election is a reminder to fight for the people instead of amongst themselves.