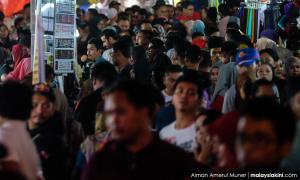 YOURSAY | ‘Harapan should focus on holding on to its 30pct Malay support, and 80-95pct non-Malay support.’

Undecided: “More than half (53 percent) of Malay and bumiputera respondents preferred the opposition pact, while only 33 percent said they would choose Pakatan Harapan should a general election be held now,” according to a survey by think-tank Emir Research.