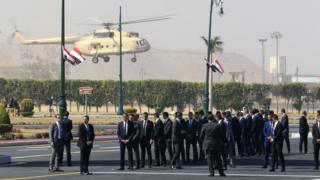 A military funeral is being held in Egypt for former President Hosni Mubarak, who died on Tuesday aged 91.

A few dozen supporters gathered outside the Field Marshal Tantawi mosque in eastern Cairo, where the ceremony is taking place. Mubarak's body will then be transported to his family grave.

The government has declared three days of national mourning.

Mubarak was forced out of office by an Arab Spring popular uprising in 2011, after 30 years in power.

He spent the next six years in prison or military hospitals while standing trial on various charges.

In 2012, Mubarak was sentenced to life after being convicted of complicity in the murder of protesters during the uprising. But he was eventually cleared on appeal.

He was also given a three-year jail sentence for embezzling public funds.

State media reported that he died at a Cairo hospital after undergoing surgery.

Dozens of Hosni Mubarak's supporters, many dressed in black, gathered outside the mosque where the funeral was held. They held signs expressing gratitude for Egypt's "greatest leader".