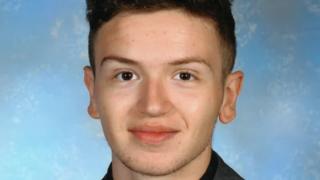 The early release of a teenager who stabbed his friend in the heart has been described as "crushing" by the dead boy's family.

Joshua Molnar, now 18, was cleared of murder and manslaughter following the death of Yousef Makki, 17, but was detained for possessing a knife.

Molnar's release comes days before the first anniversary of the incident in Hale Barns, Cheshire, on 2 March 2019.

The Ministry of Justice said its "thoughts were with Yousef's family".

A trial heard Molnar acted in self-defence when Yousef pulled out a knife in a row over an attempt to rob a drug dealer.

Yousef Makki, 17, was stabbed in the heart with a flick knife

However, Molnar falsely suggested Yousef had been stabbed by someone who drove off in a grey VW Polo, information which was circulated on the police network.

Molnar was sentenced to be detained for eight months and given a training order, after he admitted perverting the course of justice and possession of a knife.

At the time, Yousef's family described the sentence as "disappointing".