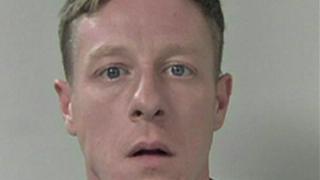 A man who smuggled three Vietnamese people into the UK in a car roof box has been jailed for three years.

Robert Rooney, 34, was stopped by Border Force after driving his Ford Fiesta into the UK control zone at Coquelle, France, on 5 October.

He told officials the roof box contained camping equipment but two men and a girl, 15, were found inside, Maidstone Crown Court heard.

The roof box was locked and had no ventilation, Border Force said.

Robert Rooney was stopped at the UK border checkpoint in France

Judge Catherine Brown said had there been a delay in the crossing, or an accident on the road, it "could very well have had tragic consequences".

Sentencing him, she added: "It was a high-risk venture."

Dave Fairclough, Deputy Director of Immigration Enforcement Criminal and Financial Investigations, told the BBC: "Robert Rooney went abroad on the pretence of going for a fishing trip and to meet his brother.