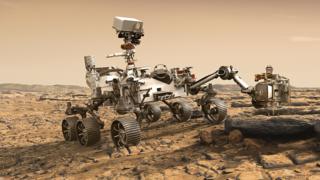 America's next Mars rover will be called Perseverance

Artwork: Perseverance looks the same as Curiosity but it represents a step-up in capability

The American space agency has a new name for the rover it will be sending to the Red Planet this summer.

To date, the project has been known only by its code name - Mars 2020.

From now on, it will be referred to as the Perseverance rover.

The name was picked from a shortlist of nine submitted by schoolchildren.

The Perseverance rover will begin the process of trying to bring rocks back to Earth for study.

It will trundle through an equatorial crater, looking for the best samples it can cache for retrieval by a later mission.

Scientists think this will be the best approach to establishing whether or not life has ever existed on Mars.

Nasa's naming competition for the robot attracted 28,000 entries, with all submissions accompanied by a short, 150-word essay.

It took volunteers — educators, professionals and space enthusiasts — to whittle the number down to a more manageable list of nine on which the public was asked to vote.