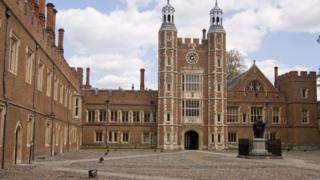 Eton College was founded by King Henry VI in 1440

A former teacher at Eton College has been charged with sexually assaulting three boys.

Matthew Mowbray, 48, was dismissed from the public school in Eton, Berkshire, after his arrest in May 2019.

The prestigious school charges fees of more than £40,000 a year.

He is also accused of voyeurism and three counts of making indecent photographs.

Mowbray, of Locks Heath, near Southampton, was granted bail and will next appear at Reading Crown Court on 31 March.

Eton said the welfare of its pupils was its top priority

A letter seen by the BBC from Eton's headmaster Simon Henderson was sent to parents this week informing them of the case.

A spokesman for the school said: "Eton College can confirm that, as a result of information passed by the school to the local authority designated officer and to the police, a member of staff was arrested in May 2019, suspended from work and subsequently dismissed.