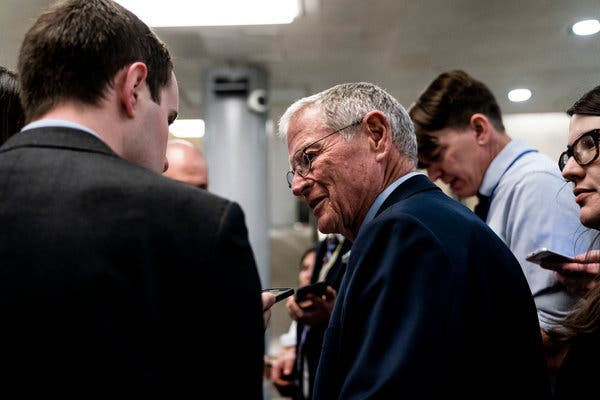 One Group of Older Americans Is Ignoring Coronavirus Advice: Members of Congress

Public health officials concerned about the new coronavirus have been warning people over 65 to avoid crowds, limit physical contact with others and skip “nonessential travel.”

Yet this week, a group of Americans 65 and older who fly frequently between cities — shaking hands with many strangers as they go — have been meeting in large groups to conduct their work. Between the U.S. House and Senate, there are almost 200 of them.

When a reporter in the Capitol asked Senator James Inhofe of Oklahoma, 85, what precautions he was taking to protect himself from the disease known as Covid-19, he said none — and extended his arm with confidence: “Wanna shake hands?”

Mr. Inhofe, chairman of the Armed Services committee, is one of five octogenarians in the Senate. In an institution where seniority reigns, it is an understatement to say that older Americans are overrepresented in Congress. Nearly half of the senators are 65 or older. Nearly 150 members of the comparatively younger House of Representatives are above that age.

Government messages to the public have urged people in that age group to take serious precautions to reduce the risk of infection. While the precise fatality rate for coronavirus is still unclear, evidence from around the world shows that older people are at substantially higher risk of serious illness, hospitalization and death.