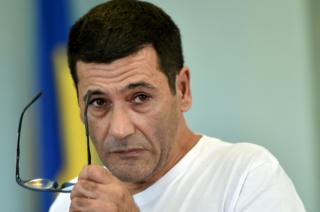 Two men who impersonated a French minister to trick wealthy people out of more than €55m (£48m) have been jailed by a court in Paris.

They denied fraud and usurping Mr Le Drian's identity but were found guilty.

Chikli was jailed for 11 years and fined €2m while Lasarevitsch received a seven-year sentence and a fine of €1m.

As the sentence was handed down, Chikli shouted: "It's a scandal. You should be ashamed."

The court was told that the Aga Khan - spiritual leader of Ismaili Muslims - and Turkish business tycoon Inan Kirac both fell victim to the scam, which took place in 2015 and 2016.

Prosecutors said that in meetings arranged on Skype, one of the fraudsters would wear a custom-made Le Drian mask and sit in a facsimile of Mr Le Drian's ministerial office, complete with flags and a portrait of then-President François Hollande.

The real Jean-Yves Le Drian is on the left, while the fake Le Drian sits behind a desk in a makeshift office