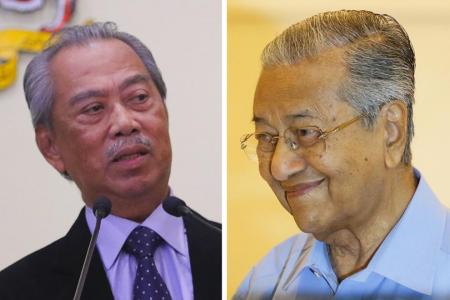 Malaysia's new PM says he has written to Mahathir to apologise

He said he has written to the man he replaced to ask for forgiveness if he had hurt him.

Dr Mahathir, 94, sparked turmoil with his surprise resignation last month, shortly after his coalition partners were seen in talks with his opponents.

Tan Sri Muhyiddin, a former minister in Dr Mahathir's Cabinet, was later sworn in as prime minister on March 1, joining hands with the old ruling Umno - which lost a general election for the first time in 2018 - and the Islamist party PAS to form a new coalition.

Mr Muhyiddin said he has written to request a meeting and apologise to Malaysia's most prominent political figure, who ruled for 22 years between 1981 and 2003, before coming out of retirement to contest and win the 2018 election.

"We have formed this government and I want Tun to endorse this government, that it is a government for the people," Mr Muhyiddin, referring to Dr Mahathir by his title, told a news conference.

His comments came after Dr Mahathir said in an interview published yesterday that a vote of no-confidence against Mr Muhyiddin was likely to fail.

Dr Mahathir told Sinar Harian: "It (Cabinet) will last until the next general election. Now that he (Mr Muhyiddin) is government, he can give 'sweets' to many.