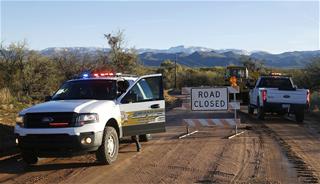 Dad Whose Kids Died in Flood Charged With Manslaughter

The most convenient way to buy movie tickets! Try here!
Do you want a free iPhone Xs? Many other amazing prizes are waiting too!

(Newser) – The parents of two kids killed in an Arizona flash flood in November have been hit with charges after those children, plus one of their young nieces, all drowned in the floodwaters. A spokesman for the Gila County Sheriff's Office confirmed to People that Daniel Rawlings was charged with three counts of involuntary manslaughter, as well as seven counts of child abuse. His wife, Lacey Rawlings, was also charged with seven counts of child abuse. Daniel Rawlings was said to have been behind the wheel Thanksgiving weekend of a military-style vehicle that allegedly drove around a barricade erected to keep people from using a crossing over the swollen Tonto Creek. The vehicle got caught up in the rushing waters, and while Daniel and Lacey Rawlings managed to escape the vehicle with two of their children and two of their nieces, three children were swept away, per KPHO.