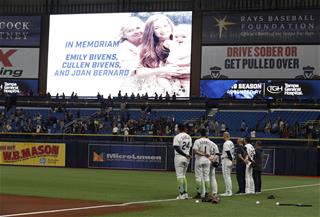 'I Began to Scream in the Middle of the Airport'

Shop the deals you love at up to 70% off!
Find more home service promotions here!

(Newser) – "I found out my family was gone over a Facebook headline." So says Blake Bivens, the Tampa Bay Rays pitching prospect whose wife, infant son, and mother-in-law were murdered in August. Eight months after the crime—for which Bivens' brother-in-law is charged—the 24-year-old sat down with pastor Travis Gore to discuss the worst day of his life. It was a game day for the pitcher, who had traveled to Tennessee with the minor league Montgomery Biscuits, per CNN. But he was distracted as he woke up and checked his phone, finding no message from his wife. "As soon as I clicked on Facebook, I just saw a headline," describing a search for his brother-in-law, Bivens says. Unable to reach his wife, he headed to the airport so he could get home to Virginia. He then checked Facebook again.