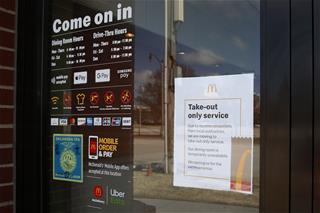 (Newser) – Two employees of a McDonald's in southwest Oklahoma City were shot Wednesday in what authorities described as a dispute involving the closure of the restaurant's dining area. A third employee who fell and suffered a head injury during the scuffle was also taken to hospital, per KOCO. Oklahoma City Police Lt. Michelle Henderson tells NBC News that the victims, including two 17-year-olds, are in non-life-threatening condition. One male employee was shot in the upper arm and another in the shoulder, per KOCO.