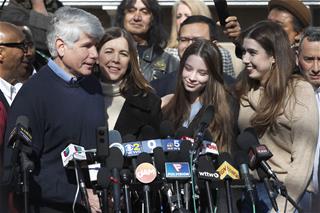 (Newser) – The Illinois Supreme Court officially disbarred former Gov. Rod Blagojevich on Monday, two months after a state panel recommended that the disgraced politician lose his law license. The court's decision was hardly a surprise, and Blagojevich, whose license was suspended indefinitely after his 2008 arrest, did not fight to regain it. He didn't attend a March hearing about the matter before the Illinois Attorney Registration and Disciplinary Commission, the APreports, and he suggested afterward that he had no intention of practicing law again. "Imagine yourself sitting on a plane and then the pilot announces before takeoff that he hasn’t flown in 25 years," Blagojevich said. "Wouldn't you want to get off that plane? I don’t want to hurt anybody."