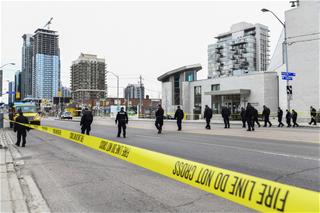 Exclusive moving service promotion!
Do you want a free iPhone Xs? Many other amazing prizes are waiting too!

(Newser) – A teenager accused of stabbing a woman to death at a Toronto massage parlor was charged with terrorism Tuesday after police said they uncovered evidence the attack was inspired by an online community of sexually frustrated men. The 17-year-old was originally charged with first-degree murder and attempted murder Feb. 24 following multiple stabbings with a sword at an adult massage parlor. A 24-year-old woman, Ashley Noelle Arzaga, was found dead in the parlor. Toronto police contacted the Royal Canadian Mounted Police's anti-terrorism unit after investigators found evidence the accused was inspired by "incels," a fringe online subculture that allegedly plots attacks on people who have sex, the AP reports. "Incel" is short for "involuntary celibate."