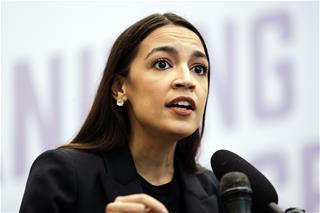 Do you want a free iPhone Xs? Many other amazing prizes are waiting too!
Daily Flash Sales up to 80% OFF! Don't say bojio!

(Newser) – On Thursday, a Manhattan judge issued a ruling affecting the NYPD and protests in New York City, and AOC is pushing back. Per Law & Crime, Criminal Court Judge James Burke granted the police department's request to allow for the detention of arrestees in Manhattan, the Bronx, and Brooklyn for longer than 24 hours, even if criminal charges aren't brought. His decision came after the city's Legal Aid Society filed a writ on behalf of hundreds of people in city jails who'd been at demonstrations swirling around George Floyd, a black man killed in police custody in Minneapolis. "There is a crisis within a crisis," Burke said in justifying his ruling. New York law requires a person to be arraigned within 24 hours of an arrest, but Burke agreed with the NYPD that "extreme measures" are necessary to keep order due to "rage against the police department."