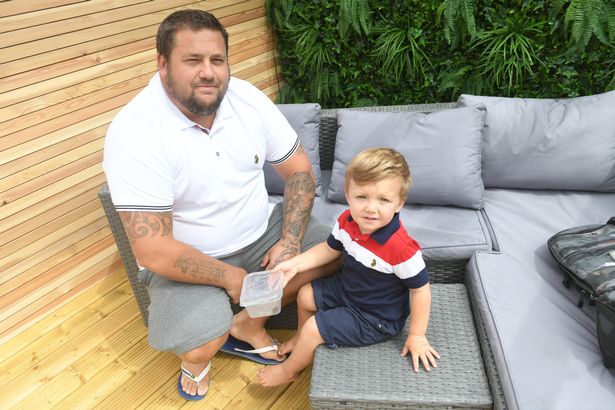 'What the hell is that?': Giant bug with stinger falls from sky into family's garden

Samantha Stoneley, 28, from Hull, has warned other families to be aware after the giant winged insect fell into her garden and died - days after a giant Asian hornet was found nearby

A homeowner has described her fright after a giant insect fell from the sky into her back garden - "like a scene from a movie".

Samantha Stoneley was having a tea break in her garden when the bug - longer than an index finger and with a big stinger - swooped down and died in front of her.

The 28-year-old mum has her own business and was working from home in Willerby, near Hull, with workmen installing decking at the time.

She said people don't believe her when she says how big it was and she is now worried there could be more of them in the area.

"All of a sudden this thing came flying over us and we just thought, 'What the hell is that?'" Samantha told Hull Live.

"I talk about the size of it and people don't believe how big it was if they weren't there."

She said she wanted to raise awareness that the bug might harm children if it was stumbled upon while playing in the garden during the warm weather.

It will only increase concern after a similar creature was  discovered in an east Hull garden just a few days earlier by a toddler, which was feared to be a giant Asian killer hornet.

That species has distinctive yellow legs, much like the bug found in Samantha's back garden, and has very potent venom.

"I would hate anyone's child to get stung by that because it could do some real damage," Samantha said.

"It was huge. It's not something I've ever seen before, it's something you would expect to find abroad.

"I've been to a lot of places, including Australia, and I've never seen something quite that big."

She said the reaction to the creature falling out of the sky had been "like a scene from a movie".

"It just hit the floor and didn't move from that position," she said.

"We were all so shocked and just looked at each other like, 'What do we do now?'

"It frightened me so it would frighten any child coming across it playing in their garden."