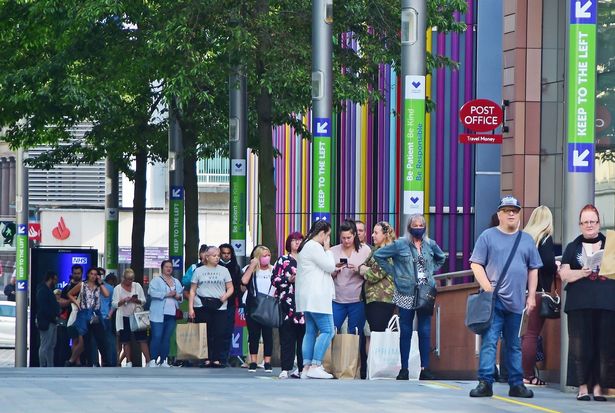 An anonymous worker at Primark says the shop's first day trading after the coronavirus lockdown saw huge queues forming at 3am, and that social distancing will be impossible to enforce

A Primark employee has described the store's first day of trading after lockdown as "hell".

The staff member, who did not want to give her name, said that "near fights" broke out between queuing customers after lines began forming at 3am.

She says she is concerned it will be impossible to enforce social distancing measures, which require shoppers to stay two metres apart at all times.

"[Customers] technically have to social distance but staff and security only have two eyes and we don’t have everyone back yet as it’s not needed. So guaranteed there will be lots of people breaking the rules," she told Metro.

For the latest on the coronavirus pandemic, read our liveblog here

"The manager has said it’s already been hell.

"People were queuing from 3am. I know the people nearer the front camped out all night and apparently there’s already been near fights," she added.

It comes as thousands of people took to the country's high streets today after non-essential shops re-opened their doors for the first time since the coronavirus lockdown began on March 23.

In London, tens of thousands of people flooded onto tubes and buses to visit the capital's retail hotspots.

Worrying pictures showed huge queues as people crowded around entrances with no social distancing in sight.

In London's Oxford Street, more than 400 people gathered around the entrance to Nike in scenes reminiscent of Christmas.

One eyewitness said staff were advising shoppers to "keep their distance", but people were just "pushing at the front".

Crowds were also pictured outside Primark in Marble Arch, London, and Doncaster this morning - with some even camping overnight.

Meanwhile in Birmingham, staff at Primark have been hemmed in by queues since 6am.

In Liverpool, one branch was forced to open 45 minutes early due to overcrowding fears.

It comes after Boris Johnson said people would be able to "shop with confidence" from Monday, while Chancellor Rishi Sunak insisted it would be "safe" to do so.

To prevent the spread of coronavirus, Primark has closed its fitting rooms and customers are being asked to avoid touching things they do not plan to buy.

Returned clothing is also being quarantined for 72 hours, and the high street giant also says it is increasing in-store cleaning.

Paul Marchant, Primark's CEO, said: "We have really missed our customers and we are delighted to be back on 15 June and able to provide them with the quality, affordable products they love from Primark."

He added that staff have "worked hard" to make sure there is clear signage and extra help on hand to make sure shoppers understand the changes.