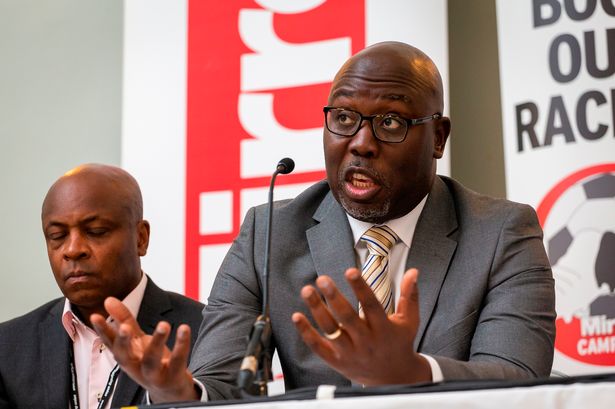 Darren Lewis: 'Being a black man in 2020 - you're seen as a threat first and a person later'

If Prime Minister Boris Johnson needs a hand, here’s a brief glimpse into life as a black man in the UK in 2020

The irony of Boris Johnson launching a cross-government commission into racial inequality in the UK is so delicious I’m putting on calories.

Clearly the Prime Minister’s own contribution with his racist language has slipped his mind. So too his Government’s decision to hold back a report on how to save black lives during a pandemic.

Either way, if the PM needs a hand, here’s a brief glimpse into life as a black man in the UK. Warning – you may find some of this uncomfortable...

To be black in this country is to be seen as a threat first and a person later.

Being black is having to tell your children, as my father warned me, that they will need to work twice as hard and shout twice as loudly to be as valued as much as their white counterparts.

Being black is reminding your teenage kids that they will have to prove their commitment to learning so that they don’t fit into some teachers’ preconceived stereotypes.

Being black is having to Google a country before you go there on holiday, just to check that it isn’t racist.

Being black is being told, at least once in your life, “You don’t sound black” by a white person you meet in person after speaking over the phone.

Being black is having to activate your kind, smiley nature to actively (constantly) set white people at ease on your initial meeting.

Being black is wearing a suit to the airport because you are fed up of being stopped at customs in jeans and trainers.

Being black is having to tell people not to touch your hair or head out of fascination.

Being black is accepting that you will be stopped at least once by police - regardless of your profession – and asked: “Is this is your car?”.

Being black is that experience of taxis not stopping for you at night in central London – with the ones that do, asking for the fare up front.

Being black is having to explain to people the history behind the ‘N’ word and why it’s use is unacceptable.

Being black is having people tell you that they aren’t racist because they listen to Bob Marley.

Or knowing at work there is a glass ceiling you will never go beyond.

Being black is allowing your white friend – or partner – to do the talking so that you don’t come across as the “angry black man”.

Being black is seeing Government ministers calling for racial diversity with zero black members in the cabinet.

Being black is going for hours watching TV or listening to the radio on any given day before coming across a presenter who looks or sounds like you.

Being black is seeing media outlets perform linguistic gymnastics to describe clear evidence of racism as “alleged”, “racially-charged” or “racially-loaded”.

Being black is seeing industry leaders convince themselves that the best person for the job comes from just one demographic.

Being black is having people misinterpret your call for a level playing field as demanding jobs on a plate.

Being black is seeing the evidence presented to illustrate racial inequality - then having TV and radio shows hold ‘debates’ asking if the concerns expressed are real.

Even this list barely scratches the surface. There’s more. So much more. Johnson had better buckle up.