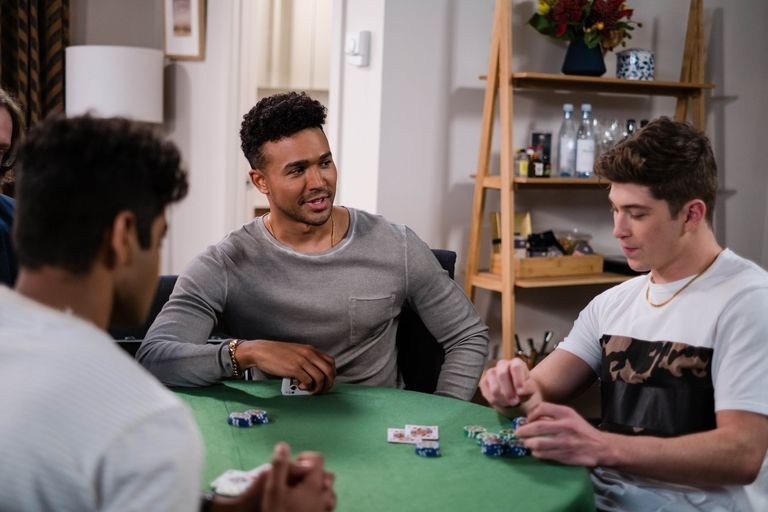 Hendrix should quit while he’s ahead (Picture: Channel 5)

Well Hendrix (Benny Turland) has got himself in a right old pickle when it comes to his new gambling addiction in Neighbours, and he’s about to dig that hole a lot deeper.

Things are starting to get way out of control. He’s playing with the big boys and is definitely not ready, but he’s in too deep to have any say anymore.

A new game is organised and he has no choice but to participate, he needs to prove to Kane (Barry Conrad) he has what it takes to pay him back. His life depends on it. But if he thought that would solve his problems he is very wrong. If anything, he’s adding fuel to the fire.

Hendrix has not played a good hand (Picture: Channel 5)

In order to keep up with the lads he places one hell of a bet, and now he stands to lose something he doesn’t even own – No. 24.

Yep, the wally decides betting a whole house – that he doesn’t even own – is a wise move. And of course he loses. His problems just got exponentially bigger. One way or another, now he knows he’s a dead man for sure. The house is Kane’s and Hendrix is at a complete loss.

But someone uncovers his huge addiction secret – Nicolette (Charlotte Chimes). As if things couldn’t get any worse, she threatens him that if he doesn’t tell his dad what’s going on, she will. Now Hendrix faces being figuratively killed by his dad, or literally murdered by Kane.