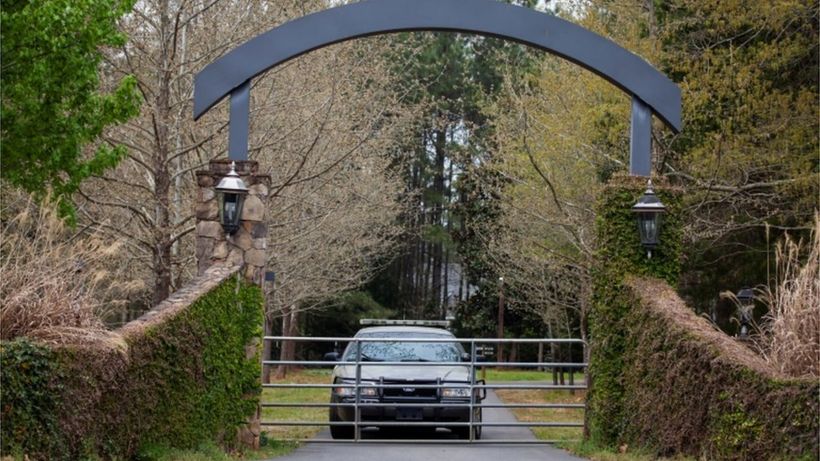 image captionSheriff officials guard the home where the shooting occured

The family were found in their home in Rock Hill, South Carolina, 30 miles (48km) from Charlotte, North Carolina.

Officials said the murders were committed on Wednesday evening by Mr Adams, 32, who then killed himself in a nearby home after a standoff with police.

A person who spoke on condition of anonymity told the Associated Press news agency that Mr Adams' parents live near the doctor's home and that Dr Lesslie had treated him.

Mr Lewis was a technician with Gaston Sheet Metal Services working at the home. Another worker at the home, Robert Shook, was also shot and taken to hospital where he has undergone multiple surgeries.

"Both men involved in this incident are long-standing, beloved members of our family at GSM," the company wrote on Facebook.

Dr Lesslie had been married to his wife for over 40 years, according to an online biography. He was a well-known doctor and author of books about medicine.

image captionDr Lesslie was well known in the region

Who is the suspect?

In the 2010 season, he suffered a severe ankle injury that left him with screws in his leg, according to CBS News. In 2012, he suffered two concussions over three games while playing for the Oakland Raiders.

A man who claimed to be Mr Adams' father told WNCN-TV that his son was the attacker. "I think the football messed him up," Alonzo Adams told the station.

"He didn't talk much and he didn't bother nobody," he added.

On Thursday, an NFL spokesperson expressed condolences in a statement, saying: "Our hearts go out to the families and friends of the victims of this devastating tragedy."

image captionMr Adams, pictured in 2010 when he was a cornerback for the San Francisco 49ers

What did Mr Biden say?

Mr Biden was already scheduled to announce new gun restrictions on Thursday. He paid tribute to the victims during his address at the White House Rose Garden.

"As I was coming to the Oval Office I got the word that in South Carolina a physician, with his wife, two grandchildren and a person working at his house were gunned down. All five."

"So many people sitting here today snow that well," Mr Biden told the audience, who included victims of gun crime. "They know what its like when the seconds change your life forever."