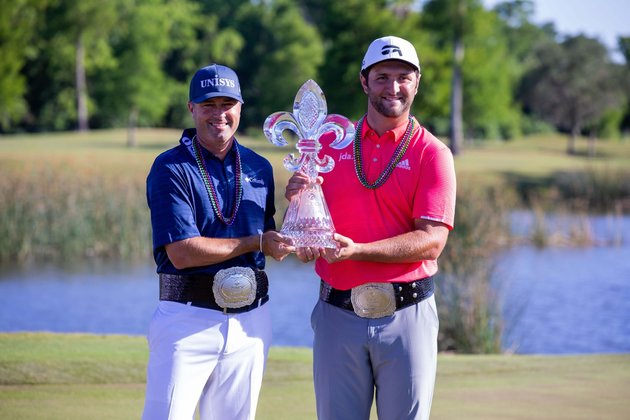 NOTES: The two-player team event returns after being canceled in 2019 due to the coronavirus pandemic. It is the only team event on the FedEx Cup schedule. ... Teams will play Four-ball (best ball) during the first and third rounds and Foursomes (alternate shot) during the second and fourth rounds. A sudden-death playoff would begin with Foursomes for the first extra hole and alternate formats until a winner is determined. ... The event features 80 teams and 160 players. The low 33 teams and ties will make the cut. ... FedEx Cup points and official money will be awarded to teams making the cut based on combining every two positions from the distribution table for a standard PGA Tour event, with each team member receiving an equal share. The winning team will evenly split first and second place FedEx Cup points (500 for first, 300 for second for 800 total points, or 400 for each player). Official money will be distributed in the same manner. ... 60 is the low 18-hole score in the team format (all in Four-ball), a record shared by five teams since the team format was adopted in 2017.