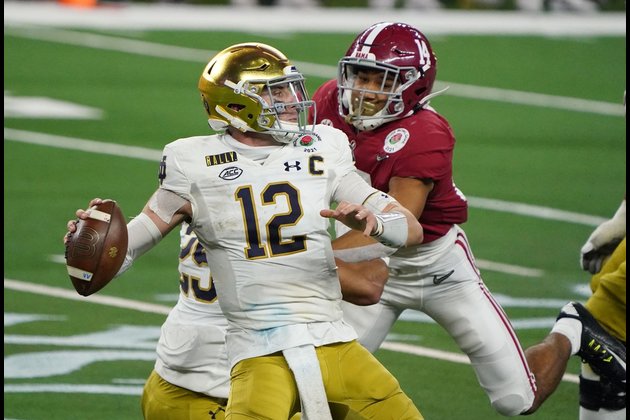 Ian Book is used to being overlooked despite playing on the big stage at Notre Dame.

That will continue in the NFL after the diminutive Book was selected in the fourth round of Saturday's NFL draft by the New Orleans Saints.

Book stands just 6 feet tall, which is on the small slope of NFL signal callers. But the Saints had a small-size quarterback for the past 15 seasons in legendary Drew Brees, the sure Hall of Famer who retired after last season.

So naturally, another chapter about Book's height was being written after he went to New Orleans with the 133rd overall pick.

"That's just been the story my whole entire life," Book told reporters of his height after being selected. "I've always had a chip on my shoulder. You know, I'm not getting any taller. And Drew Brees has been able to do it -- there's many other quarterbacks, you can go down the list, that have been able to do it.

"We're different players, but we're similar in stature. And (Brees) proved to everybody down there and in the world that he could do it. And I want to do the same thing, and I just feel like I fit in that system well. You know, those are big shoes to fill, there's no doubt about it, but that's an exciting challenge for me."

Veterans Jameis Winston and Taysom Hill are slated to compete for the Saints' starting gig this season. Former NFL starter Trevor Siemian also is on the roster.