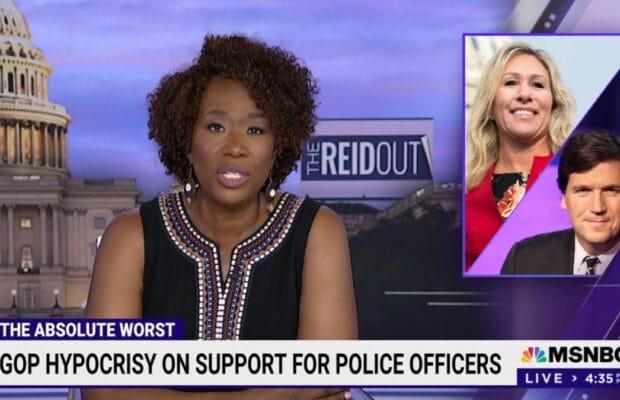 Joy Reid didn’t hold back from calling out Tucker Carlson — who she has nicknamed “Tuckums” — on today’s episode of “The ReidOut,” and shredded Tucker for pushing a theory that the Jan. 6 attack on the Capitol was somehow planned by the FBI.

“We won’t force you to listen to him, or the many leaps in logic it takes to get to this point, because it should go without saying that nope, nope, nope, not how the FBI works,” Reid said during June 16’s recurring “Absolute Worst” segment. “Legal experts say the government literally cannot name an undercover agent as an unindicted co-conspirator.”

Tucker didn’t come up with this idea on his own; he lifted it from a right-wing website called Revolver News. It’s run by former Trump White House speechwriter Darren Beattie, who was fired from the post after facing backlash for attending a conference with several well-known white nationalists.

This website speculated that the unindicted co-conspirators in the Capitol Riot were government agents and that these agents helped orchestrate the entire riot on behalf of Democrats. Tucker seized on this, reporting it as if it were fact on Fox’s “Tucker Carlson Tonight.”

Soon, the idea made its way to other conspiratorially-minded Republicans like Reps. Matt Gaetz and Marjorie Taylor Greene — who Reid went in on elsewhere in the show for refusing to recognize the Capitol cops who protected them during the Jan. 6 riot.

Taylor Greene and Gaetz are among 21 Republican lawmakers who refused to vote yes on awarding congressional gold medals to the Capitol Police present during the Jan 6 attack. Reid listed their names during her segment and called them all out for what she said was glaring hypocrisy — for claiming to support law enforcement but not government police.

“Margie Q also gave airtime to the latest conspiracy theory from Tuckums Carlson, tweeting about his latest tirade last night blaming the FBI for organizing the Capitol attack,” Joy Reid said. “It’s a theory he sourced from the extremely well known, super objective and very important news source Revolver News, which led him to raise the question of whether some of the indicted co-conspirators named in the insurrection indictments could possibly be government officials,” Reid added, dripping with sarcasm.

For the record — federal law prohibits any cooperating witnesses or informants to be charged with conspiracy, even if those people were involved in the attack. The government can’t name undercover agents as conspirators in a crime. Legal experts told the Washington Postthat the idea that these unindicted co-conspirators are very, very unlikely to be part of the FBI.

“There are many reasons why an indictment would reference unindicted co-conspirators, but their status as FBI agents is not one of them,” Cornell Law School criminal law professor Jens David Ohlin told the Post.

Joy Reid concluded her segment by once again joking that while Tucker is a regular fixture on that part of the show, he wasn’t the most offensive person in the whole charade tonight.

“While it’s always tempting to make Tucker go through some things, he’s not tonight’s absolute worst,” Reid said. “No, that dubious distinction goes to those 21 Republicans who voted against awarding those medals to the people who protected their very lives, simply because they refuse to admit the violent, ‘hang Mike Pence,’ MAGA Trump insurrection actually happened.”

THE ABSOLUTE WORST…Joy addresses the 21 Republicans who voted against awarding Congressional Gold Medals to the Capitol police who protected their lives during the Jan. 6 Capitol insurrection. #TheReidOut #reiders pic.twitter.com/p3vy405pkR