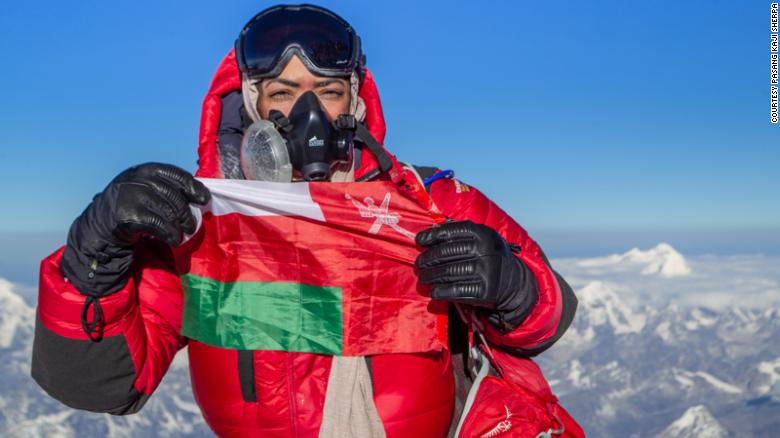 (CNN)It was a chance encounter that would change her life forever. In 2017, Nadhira Alharthy met the first Omani man to climb Everest.

Khalid al-Siyabi had summited Everest seven years earlier. He was part of a group of pioneering Omanis who were telling their inspirational stories at an assembly hosted by the Ministry of Education, where Alharthy was working as the director of citizenship at the time.

That evening she made a pledge to replicate al-Siyabi's achievement, using his mentorship as guidance.

"His story, it touched me," she tells CNN Sport. "I was inspired to do something for myself [...] to challenge myself."

Building up her strength

Before training to climb the world's tallest mountain, Alharthy's workout routine extended to going to the gym a few times a week.

She knew she had to dramatically change gears, beginning with strengthening her muscles and improving her resistance. With al-Siyabi's help, her training schedule developed into that of a fully-fledged endurance athlete, consisting of running, hiking, rock climbing, canyoning and caving.

The physical preparation for Everest was challenging, but improving her mental stamina was even harder. "Training the mind [...] it's harder than training our bodies," she says.

In the two years leading up to the climb, the only other person who knew about Alharthy's ambition was al-Siyabi. "We kept it as a secret for a long time," she says.

She wasn't just building up her mental strength for Everest, but also working up the courage to tell her family: "I was scared to tell them because I just decided to go to Everest without any experience."

'I was very lucky'

In 2019, two months before setting off for Nepal, Alharthy told her family about the expedition.

"They were very surprised and shocked because I never discussed it before. They refused the idea from the beginning. My mom was very stressed and worried about my safety," she says.

Despite their reaction, she was determined to fulfil her ambition. She arrived in Kathmandu flanked by an all-Arab, all-female team -- including Mona Shahab from Saudi Arabia, and Joyce Azzam and Nelly Attar from Lebanon.

She was in constant contact with al-Siyabi until her arrival at base camp, when their line of communication started to dwindle. Her mentor had recently been admitted to hospital after suffering a stroke.

"I started feeling worried about him. But I said, 'OK, he will make it, he's strong,'" she says.

A week later Alharthy received the devastating news that al-Siyabi had passed away at the age of 46. She was in shock: "Losing him, it was the hardest time there when I was climbing."

His death gave the expedition a new sense of purpose. Alharthy wasn't just climbing to fulfill her own ambition, she wanted to honor al-Siyabi's memory as well.

"He was the only person who stood with me, he helped me," she says.

"I decided to do it not for myself and not only my country, he would also be part of [...] the climb."

After two months of trekking across snow capped mountains, she found herself atop Everest on May 23, exactly nine years to the day since al-Siyabi's summit. She commemorated her mentor by planting a piece of paper inscribed with his name on the crest of the mountain.

She says completing her first summit alongside three other Arab women was what crowned her triumph: "I was very lucky to have them [...] it brought us all together."

Two years later, Alharthy's face still lights up when she revisits her memories of climbing Everest. "It's not like when you buy something, when you try a new meal, when you go shopping," she says. "It was a different type of happiness."

While participating in endurance sports, Alharthy has had the chance to connect with fellow mountaineers.

In January, she became the first Arab woman to summit Ama Dablam (22,349 feet) -- a mountain south of Everest -- while climbing alongside Qatari mountaineer Fahad Badar.

"I was not planning to go to Ama Dablam from the beginning. Then one of our friends, Fahad [...] he messaged me that he was going," says Alharthy.

"I told him, I'm not as afraid of climbing the mountain as I was afraid of the cold because it's winter season and that's very difficult."

'The Fight of the Century': A divided US nation 50 years on

Olympian pressured to 'perform better' and lose a few pounds

Having unsuccessfully attempted the same climb in 2018, Alharthy was "scared of failing again," but she knew that Badar's moral support, coupled with her training for Everest, would set her in good stead. "I felt that I was prepared."

With an exposed ridge that requires vertical mixed climbing in rock, ice and snow, she acknowledges this was her most grueling trial yet.

"There is no way for mistakes on Ama Dablam because it's like you are climbing a big wall. We had to be attached on safety ropes all the time," she adds. "If we miss anything, it's very dangerous."

Over the past year, Alharthy hasn't had a chance to plan ahead for expeditions due to coronavirus-related travel restrictions. In the meantime, she's been taking advantage of Oman's arid desert terrain -- most recently visiting the country's epic Al Hoota Cave, which is over two million years old and has a total length of almost 2.8 miles.

"I want to use all the chances I have here in Oman to improve myself physically," she says.

Her next goal is to climb one of the 14 mountain peaks across the world that stand taller than 8,000m, dubbed by NASA as the Eight Thousanders.

Rock formations in the Al Hoota natural cave after it re-opened to the public for the first time in three years near the ancient city of Jizwa in Oman's northern Dakhiliya region on September 2016.

Cementing her status as a record-breaking mountaineer means that Alharthy has attracted waves of media attention over the past few years, but she was never searching for the spotlight.

Even though she relishes the opportunity to develop her physicality and test her resilience, she says that the intense media scrutiny that comes with the job is emotionally draining.

Her limits were tested after Everest. She was having trouble dealing with the emotional comedown of completing such a monumental feat and decided to stop training for a while. "I was feeling depressed," she says. "I felt this pressure on me, it was something I was not looking for."

Alharthy has since found solidarity through her faith.

Alharthy says she hopes her story will inspire young Omanis to participate in endurance sports.

Ahead of her expedition to Ama Dablam, she earned messages of support from her Muslim fans on social media, where she has now amassed over 16,000 followers. She sees their prayers as a form of protection. "Our faith [...] it makes you stand up again. It gives you strength, it gives you power."

Her increased visibility online means that her family is now more accepting of her endeavors. But like any parent, her mother continues to agonize over the safety of her daughter. "For them, it's something very exposed, it's something very unsafe. My mom, she's waiting for me to tell her that I will never climb again," she says. "They support me to do what I want, but they are worried."

She continues to inspire confidence in other Muslim women, many of whom have been encouraged to participate in outdoor sports after reading about her story.

"When I started training, many women were reluctant to do outdoor sports, especially those who wear the hijab, but it's now becoming quite common," she recently told the Times.

Her 32 nieces also embolden her to share her journey and highlight the power of female participation in sport. "They are very strong, and they stand up for their rights," she says.

'Believe in your dream'

Alharthy says the main purpose of her journey is to practice author Todd Henry's mantra -- to figuratively "die empty" from sharing knowledge: "I think that's what Khalid was doing with many Omanis."

"I think it's a great story," she goes on to tell CNN. "Even for the new generation, for the other girls and men, just to support each other, to help each other, not to hold knowledge for ourselves."

She hopes that by teaching others about her experience through her newly appointed role as the general manager's assistant for the Girl Guides of Oman, she can lift up a new generation of young Omani people to take up endurance sports.

Alharthy is also learning from her peers. She references one of her Everest teammates, Arthur Muir, who was initially unable to finish his trek in 2019. However, in May of this year, he became the oldest American to climb the world's highest peak at age 75.

"He's very positive, [a] great personality, [an] inspiration for all of us," she says. "Believe in yourself, believe in your dream and work hard."

Ultimately, she draws strength from staying committed to her faith and her Omani roots.

"I always wake up in the morning and say, 'Alhumdullilah, thank God I'm here [...] I reached my goal," she says.