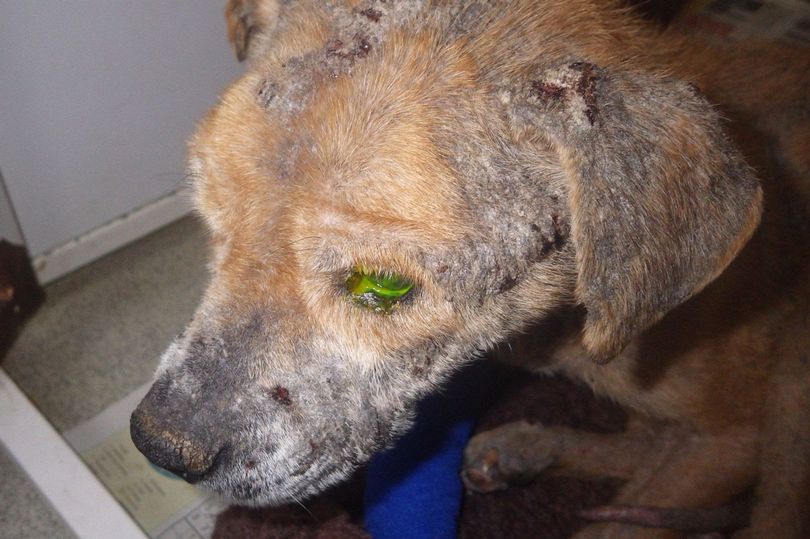 A woman has been banned from keeping animals after her elderly dog was discovered collapsed in the garden underweight and with an eye infection.

Victoria Taylor, 47, of Oakwood, Derby, admitted to neglecting her 18-year-old Staffordshire bull terrier Missy and has been banned for keeping animals for five years, according to Metro.

The dog was later diagnosed with cancer and put down.

Southern Derbyshire Magistrates' Court heard how the RSPCA were called to Ms Taylor’s address on November 1st last year after a member of the public reported seeing an animal collapsed in the garden.

Inspector Rachel Leafe from the RSPCA went to the house but there was no-one inside.

She went into the neighbour’s garden and saw a very underweight elderly dog locked out of its home and curled up under a bush in the dirt.

The dog was covered in mange and had an eye infection.

Inspector Leafe said it was a cold and rainy night with fireworks going off ahead of fireworks night.

She said: “I used a ladder to look over the fence into the garden.

“Here, directly beneath me, lay curled up under a bush on the dirt an elderly looking, very underweight medium-sized dog.

"There were odd sprigs of fur, enough for me to tell she should have been tan or red in colour. The whole body was covered in what looked to be mange.”

She continued: “I could see there was no man-made shelter at all available for her. The back door to the property was shut so she could not get inside. I could not see any food or water or any empty bowls.

“I whistled to her and she eventually, very reluctantly, stiffly and unsteadily got up and walked a few yards before lying back down on the wet ground.”

Inspector Leafe called Derbyshire police and Missy was rushed to a vet for emergency treatment.

An expert independent vet said in a report that Missy was “severely emaciated” with a body score of 1.5 on a scale of 0 to 5, with 0 being the thinnest body condition.

The report adds: “She had a severe dry eye. The condition is caused by the body reacting to its own tears as part of an immune reaction.

"This condition is extremely painful and both corneas were inflamed and cloudy.”

It also found that Missy had long pointy nails showing that she had been having little or no exercise.

The dog had weeks of treatment with the RSPCA but on December 3 rd it was discovered that an aggressive form of lymphoma cancer and had just a few weeks to live.

A vet decided that the kindest thing to do was to put Missy to sleep and did so while she was under general anaesthetic.

As well as the ban on keeping animals for five years, she was handed a 12-month community order and made to attend15 rehabilitation sessions.

In mitigation the court heard how Ms Taylor had admitted to the offence in an interview, telling Inspector Leafe she was distraught that she had allowed Missy to get into such a condition.