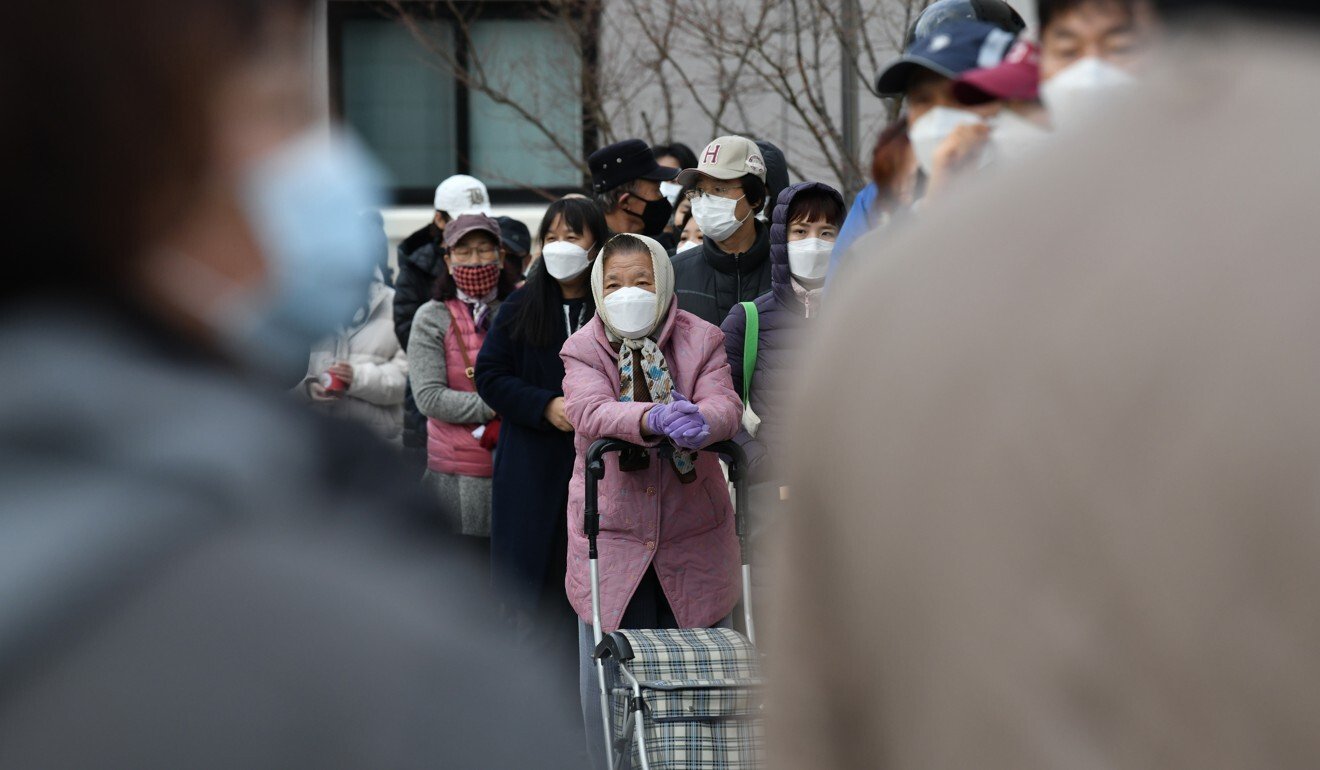 Controversial sect hopes foreign recruits can boost its numbers, which may have fallen by 100,000 after a super-spreader incident put the international spotlight on its secretive ways

Critics say it tricks people into joining its classes without revealing its identity, while a former recruiter admits preying on foreigners’ love of K-pop

views in a relaxed, informal setting with no strings attached.

Little could she have known it would be the start of a year-long entanglement with a South Korean sect that would leave her feeling drained, isolated and trapped.

The workshop was being run by the Shincheonji Church of Jesus, a controversial and secretive religious movement established in 1984 by Lee Man-hee, 89, who claims to be the second coming of Jesus Christ and has a devoted following of hundreds of thousands in

But nobody told Peters that. At first the meetings were passed off as informal gatherings of friends, but they soon grew into something more and Peters found her free time increasingly taken up by the group. Yet any attempt by her to find out more about who was running the group would only anger the other members.

“After attending the first session, people asked if we wanted one-on-one Bible classes taught by missionaries and scholars,” recalled Peters, 31. “I started out meeting the teachers twice a week before making it three times as the classes became more intensive.” The two-month course soon morphed into six months, and Peters was asked to take on additional commitments – daily morning services, educational sessions twice a week, and regularly going in public to proselytise. “They even had me walking the streets heavily pregnant to try and recruit others using the lies they always use on new people,” Peters said.

While Peters learned about the teachings of Lee Man-hee – such as that only people accepted into Shincheonji will receive eternal life, that Lee is the only person who can fully interpret the Bible, that pastors in traditional churches are false teachers, etc – other members of the group warned her off trying to look up the group on the internet, saying it was a sin equivalent to “Eve being tempted by the serpent and eating from the tree of good and evil”. “They used a lot of scare tactics as time went on saying things like ‘if you don’t do this, then you and your whole family are going to hell’,” Peters said. “They even wanted me to keep my participation secret from my husband.”

Shincheonji has been trying to recruit foreigners like Peters since 2014 when, having passed its initial target of recruiting 140,000 members it embraced a more ambitious goal of uniting all the world’s religions under its umbrella. Its recruitment drive has gained added impetus in recent months as Shincheonji has been hit with an exodus of members since an

at its Daegu branch put the international spotlight on the church.

The outbreak at the church occurred early into the

, in February 2020, when a 61-year-old woman who attended services at the branch was identified as a super-spreader. By March 8 of last year, the infection had spread to 4,482 people associated with Shincheonji – accounting for more than 62 per cent of the country’s confirmed cases at the time. Matters were made worse when Shincheonji initially refused to give health authorities a list of its members for contact tracing, prompting government officials in Gyeonggi province to forcibly enter Shincheonji’s headquarters in Gwacheon in a bid to obtain the information. The city of Seoul subsequently sued Shincheonji.

Suh Min-jun, at the Shincheonji Cult Counselling Centre, which was set up to rehabilitate former converts and to help family members contact loved ones still beholden by it, said that membership had dived following the coronavirus outbreak.

Who is Lee Man-hee and why is his secretive church linked to half South Korea’s coronavirus cases?

Who is Lee Man-hee and why is his secretive church linked to half South Korea’s coronavirus cases?

“Before the pandemic, Shincheonji had a total of 239,353 members and 31,849 of them were outside South Korea,” said Suh. “But we believe the Daegu case last year contributed to about 100,000 leaving the fringe church.”

With membership down so drastically, overseas recruitment has become more important than ever to Shincheonji. It is relatively hard for the group to recruit domestically, due to its level of infamy in South Korea. It received bad publicity for holding an unauthorised mass gathering at Olympic Park in 2015 and has been accused of tax evasion by producing fake receipts for donations that did not take place. In addition, within South Korea, its members already have a reputation for a lack of transparency when trying to recruit new members – such as posing as students trying to make new friends.

Abroad, where people are far less likely to have heard of Shincheonji, people like Peters are easy prey.

Peters eventually worked out the truth shortly after giving birth to her first child. Her pregnancy had given her time and space away from the group, bolstering her courage to research Lee Man-hee online.

She later confronted her “friend” and learned she had staged her entire introduction to the group and that, like a pyramid scheme, her friend had herself been tricked into joining. A few years earlier, her friend had been pulled aside by a stranger in the street who claimed to be a student carrying out a survey and was, like Peters, invited to what she was told was an informal religious discussion group.

Peters now pities her friend, who remains “very much still part of the group” and has “missed out on so much of life including spending time with family and friends”.

The counselling centre’s Suh, himself a past member of Shincheonji, said Shincheonji began actively recruiting foreigners both in South Korea and overseas at around the time of its World Alliance of Religions’ Peace (Warp) summit in 2014.

“Shincheonji created an NGO called the Heavenly Culture, World Peace, Restoration of Light [HWPL] in 2013 as a propaganda engine that invited former presidents, ambassadors, religious leaders and NGOs from across the globe to its Warp summit in 2014 that had the goal of world peace,” said Suh.

“The summit was a method to create a humanitarian image for the group and to collect money from its members,” said Suh.

Suh said that Shincheonji needed a new objective after meeting its initial target of 140,000 members in 2013.

“Shincheonji had taught its followers that once they had gathered 140,000 members, all of the world’s population would suddenly come around to Shincheonji,” he said.

“But since this obviously did not happen in 2013, they created the Warp summit in Seoul the next year and set out the new goal of unifying all religions under Shincheonji while expanding its influence abroad.”

Since then, Shincheonji members had fanned out to college campuses, language schools and sports clubs to recruit foreigners living in South Korea, he said.

Zach Rainer*, 37, from Australia, was one of the many foreigners approached by Shincheonji members during this period.

Rainer had been walking in the city of Yeoju when two women approached him and said they wanted to introduce him to their social club.

“I was new in town, so I wanted to make some Korean friends,” Rainer recalled. “And they were really cute, so I gave them my phone number.”

Less cute was the man, who looked like he was in his fifties, who accompanied the women a few days later when they all met inside a cafe. On that occasion the group persuaded Rainer to join them on a bus to the Olympic Stadium in Seoul that weekend to attend the World Peace Festival.

“The pamphlet and the video they showed me about the event seemed curiously devoid of actual content,” Rainer said.

“There were quite a few other foreigners I knew at the time who were approached to be photographed doing the Shincheonji hand sign for some obscure reason. The general feeling was that they were using them for some kind of promotional effect.”

In fact, the World Peace Festival in 2012 that Rainer was invited to was meant to showcase Shincheonji’s wealth and popularity to the South Korean press.

A blogger who was invited to the festival back in 2012 wrote that he saw “mass games that were heavily filled with slogans about New Heaven and New Earth and the coming Revelations all predicted by Lee Man-hee.”

The counselling centre’s Suh said Shincheonji had an international department that sent members to its regional branches overseas to recruit foreigners.

In a 2019 article by No Cut News – an online newspaper run by South Korea’s Christian Broadcasting System network – a former member of Shincheonji’s international department confessed that she had used foreigners’ interest in K-pop, K-drama and K-beauty to “make them prey to propagation”.

She said she had been sent to Turkey during her first year of college and would work from 7am to midnight to recruit people.

arrested 21 members of a local chapter of Shincheonji. Authorities identified them as “members of an unlawful society” who were a threat to “Singapore’s public safety, peace and good order” with their “deceptive recruitment methods”.

This Week in Asia reached out to Shincheonji for a comment on these accusations but did not receive any response.

Leticia Leal in Brazil had not heard about Shincheonji when she was contacted by a South Korean woman through a social media app last year.

“Among young Brazilians, there is a growing interest in South Korean culture such as K-pop and Korean dramas,” she said. “So, I looked for a Korean friend to talk to about culture.”

While their messages and video calls initially centred on culture, they soon turned to religion and Leal was eventually invited to an online Bible study session.

during the Zoom meeting,” Leal recalled. “But I became suspicious when my friend avoided talking about the name of the church or the pastor.”

Like Peters, Leal turned to the internet for answers. She immediately severed ties, counting herself lucky that she had learned the truth when she did.

“I would have continued to attend the Bible study sessions had I not been fortunate enough to discover information about Shincheonji online,” she said. “Everyone was kind and friendly, and I really felt like I was making friends online and learning from them.”

She is all too aware that had she not got out when she did, it is hard to know how attached she might have become. Online chat forums on Reddit and Facebook are full of advice and counselling for siblings, parents and grandparents who believe their loved ones have become consumed by Shincheonji. In many cases their loved ones began by enrolling in online theological classes, completely unaware of Shincheonji’s involvement.

Suh said in these cases it was the “earnestness of the family” that usually determined whether their loved one would continue following Shincheonji or decide to get out.

“While there are families who will risk their lives to get their children out of Shincheonji, there are others who will respect their freedom to believe whatever they want. It depends on the culture of the country.”

Cho Mit-eum, of Bareun Media, runs a website dedicated to opposing the doctrines and activities of fringe religious groups like Shincheonji. Cho said that Shincheonji used fear to prevent its members from leaving, by instilling into them the teaching that hell awaits those who listen to outside voices telling them to leave.

“Shincheonji has even been known to have encouraged members to divorce their spouses,” said Cho, adding that some members had threatened to sue parents who had tried to convince their children to leave.

Peters, who believes having her baby saved her life “by getting me out of Shincheonji”, is keen to stop the group recruiting in London. She often posts about her experience on Facebook as a warning to others.

“I want to educate people who they target so they don’t end up in the same situation as me or my friend,” she said.

* Names have been changed to protect identities