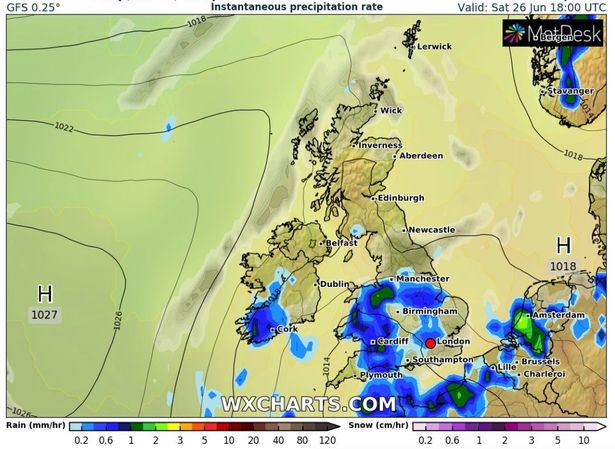 It's going to be another washout weekend with rain set to lash swathes of the country, but forecasters predict soaring temperatures on the horizon.

The Met Office warned Brits to expect a cold start to Wednesday but with some sunshine as northern and western regions are hit by downpours.

As the week draws on, the rain will get worse with 'thundery showers' predicted for the south by Friday.

But next week there will be warmer skies with soaring temperatures expected to usher in July.

It follows a weekend of relentless rainfall for many, with parts of the South East recording up to a month's worth of rainfall in one day on Friday.

Tuesday saw better weather, particularly in the South West, though rain delayed day five of the World Test Championship between India and New Zealand in Southampton.

Forecasters are now predicting it will be largely wet and cloudy from Wednesday right up until the weekend.

Oli Claydon from the Met Office said: "The best of the brightness will be further north and showers will hit the south of the UK this weekend.

"Southern regions of the UK can see temperatures hit the mid-20s by Sunday."

Cardiff and Manchester may hit highs of 20C on Sunday, with Manchester expected to hit 21C on Monday.

The current outlook for July appears to be more promising, with temperatures expected to be above average at times.

Forecasts for London predict that by the end of the month and into early July the capital and some surrounding areas will see high temperatures of up to 25C.

Current forecasts show the warmer weather is expected to last for days.

Cloudy in the north with mostly light rain for parts of north Wales, northern England, Northern Ireland and Scotland. Brighter, dry and warmer across the rest of Wales and England.

Staying mostly cloudy in the west and northwest with mostly light rain at times. Clear spells in the southeast where chilly again with a few fog patches possible.

Cloudy for most with some rain and drizzle at times. Heavier rain likely across the northwest during the day. Mostly dry east Scotland and east England where warm.

Outlook for Friday to Sunday:

Rather cloudy with areas of rain and showers sinking south. These could be heavy, especially in the south. Drier, settled weather gradually moving in from the north. Temperatures around average.