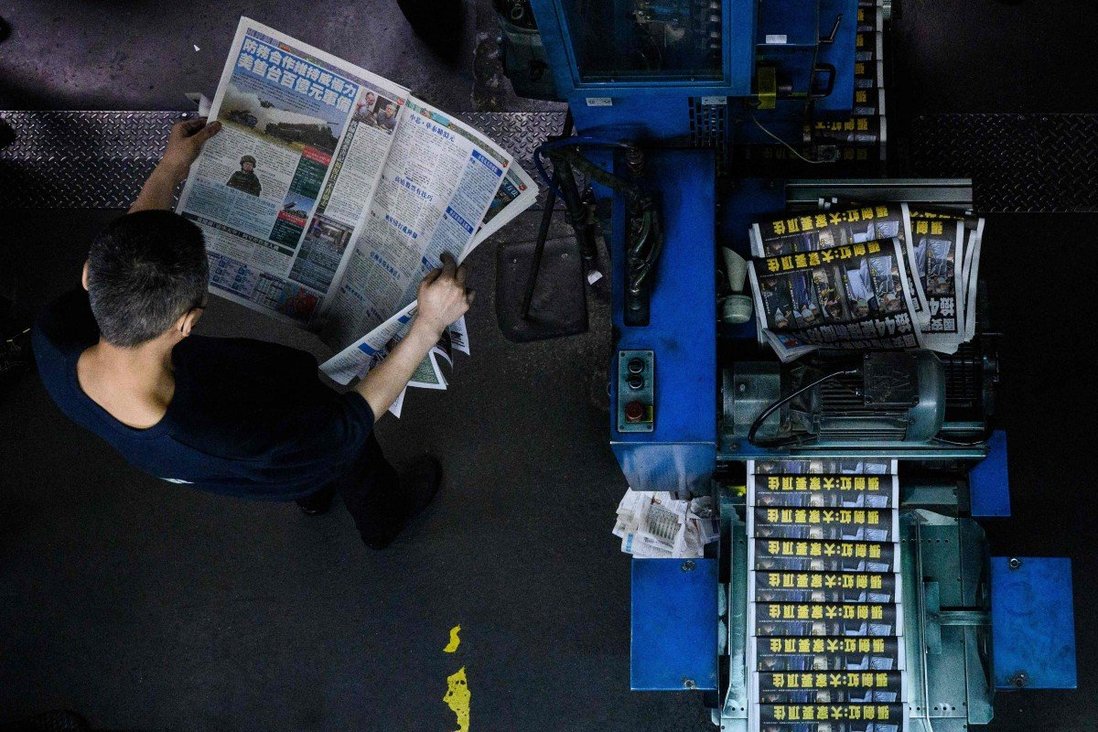 Hong Kong’s embattled Apple Daily is folding its operations earlier than expected and will stop publishing online from midnight, running its last print edition on Thursday, the Post has learned.

An official press release issued in the afternoon also stated that the newspaper’s digital version would no longer be accessible after 11.59pm on Saturday.

The decision was made by the board of directors of Next Digital, the 26-year-old tabloid’s parent company, just hours after Hong Kong’s national security police on Wednesday detained the paper’s lead editorial writer on suspicion of conspiracy to collude with foreign forces, the first such arrest under the

Since the arrest of five of its top executives last Thursday, Apple Daily has lost nearly half its workforce. But those remaining on Tuesday vowed to carry on through the end.

Yeung Ching-kee, 55, who was also a senior columnist and wrote under the pseudonym “Li Ping”, was picked up from his Tseung Kwan O home just after daybreak on Wednesday.

Records show he had penned about 800 columns and commentaries since 2016, with 331 of those coming since 2019. His most recent was published on Tuesday.

A police source said that, since last June’s enactment of the national security law, Yeung is believed to have written at least five of the more than 30 articles under investigation for breaching the legislation by calling for foreign sanctions.

The source added that police were still trying to identify at least one or two other writers in connection with the case, and that Yeung was likely to be held overnight.

Yeung is being held at the district police station for questioning and has not been charged. According to the force, the operation was ongoing and further arrests were possible.

His arrest comes less than a week after the paper’s editor-in-chief, publisher and three other executives were detained last Thursday under the national security law and accused of running more than 30 reports calling for foreign sanctions against the city and mainland China since 2019.

Top editor Ryan Law Wai-kwong and publisher Cheung Kim-hung were charged the next day with conspiring to collude with foreign forces and remanded in custody, while the other three were released on bail without charge.

The force earlier cited the publication of the articles – understood to be mostly commentaries and opinion pieces, including several written by the tabloid’s jailed founder

Chee-ying – as evidence of conspiracy to collude with foreign forces and external elements.

The board of directors at parent company Next Digital on Monday had said Apple Daily’s final edition could be on Saturday if management failed to convince the Security Bureau to release some of the HK$18 million (US$2.32 million) in assets frozen during the police operation.

Earlier in the day, just hours before Yeung’s arrest came to light, Next Magazine, a sister publication of Apple Daily, revealed it was shutting down.

Its publisher, Louise Wong Lai-Sheung, made the announcement on the site’s Facebook page on Wednesday, saying its days had come to an end despite having made a smooth transition from a print to online model.

Wong said that since steps were taken to go digital in 2019, it had amassed more than 100,000 subscribers – 40,000 more than its original target – yet failed to generate a profit.

Without alluding to the authorities’ recent move against Apple Daily, Wong delivered a veiled yet forceful message to staff.

“Some colleagues are not ready to let go, holding onto their last shred of hope. I had to tell them bluntly: ‘Stop fantasising!’” she wrote.

“There is no regret as long as we have worked hard for Next Magazine and enjoyed the freedom of the press.”

About half of the tabloid’s staff resigned over Monday and Tuesday, though remaining journalists had vowed to keep the newspaper running until Friday, when senior management was originally expected to make a final decision on closure.