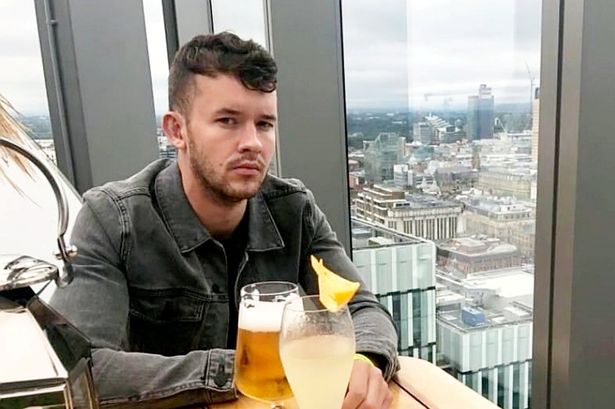 While on a six month deployment to Poland, Corporal Ryan Lovatt went on an Army-organised trip to Warsaw to learn more about World War II and lay a wreath for its 75th anniversary

A soldier accidentally plunged 70ft to his death from a seventh-floor hotel balcony in Poland after being pepper-sprayed, a coroner ruled.

While on a six month deployment to Poland, Corporal Ryan Lovatt went on an Army-organised trip to Warsaw to learn more about World War II and lay a wreath for its 75th anniversary.

Arriving for the two-day trip on July 31, 2019, the Royal Electrical and Mechanical Engineer ambled through the old town in Warsaw with his Army colleagues before a guided tour of the palace in the old town, Warsaw castle and the museum.

Going against the “four-can rule”, the Army lads went to a cocktail bar in the evening, downing beers and Jagerbombs before going to the Golden Moon strip club, the court heard.

After an argument, bouncers whipped out pepper spray and began firing it at the soldiers, who all left, the Daily Record reports.

Having avoided the first round of pepper spray, 25-year-old Ryan and his friend Lance Corporal Tommy Jackson went back to the strip club to enjoy a karaoke night and ordered a round of tequila shots.

However, the bouncers quickly descended on the pair, managing to hit Ryan in the eyes with the “powerful” spray, leaving him visually impaired, the coroner, sitting in Oxford, heard.

Talking about the “painful” pepper spray, Staff Sgt Gary Horsburgh said: “If I am honest, it messed us up. The Polish pepper spray physically burned our skin and it was put in our eyes, we were struggling.”

Shedding a tear over the video link, L Cpl Jackson said: “These bouncers were not your average UK bouncers with licences, they were normal guys outside of the bar.

“They did not show any form of ID, they were dressed in civilian clothes. Ryan said his eyes were stinging. I helped Ryan into the taxi, he said his eyes hurt and that he couldn’t see.

“It was dark, I guided him into his room, laid Ryan on his bed and he was still holding his eyes.

“We hugged each other and said good night, he thanked me for helping him and that was the last time I saw him.”

The court heard how it was captured on CCTV that at 4.09am in the morning, Ryan, from West Dunbartonshire, fell from the seventh-floor balcony of the City Comfort hotel.

Senior investigator Staff Sgt Stephen Cook said: “We surmised that he had gone out to get some air, leaned against the netting, which has given way and he has fallen through.”

Pathologist Dr Russell Delaney confirmed that Ryan had died from injuries to the chest, abdomen and pelvis following the fall, where he also fractured his spine, arm and ribs.

During the post-mortem examination, the pathologist found Ryan had drunk three times the drink-drive limit which would have impaired his balance, coordination and caused poor judgment.

The consultant forensic pathologist confirmed the soldier’s injuries were “unsurvivable”, before his body was repatriated to Brize Norton, Oxfordshire.

The court heard how the senior ranked Staff Sgt Horsburgh should have appointed a person to be “sharp watch” to remain sober during the night and should have enforced a four-drink rule as well as a midnight curfew.

In his concluding remarks, Mr Salter said: “This is in essence likely to be a case involving an accidental fall in the context of intoxication and also the effects of pepper spray on Ryan Lovatt.

“To add to that, he was unfamiliar with the room and the balcony layout, this being his first night at the hotel.”

The coroner will be writing a report to prevent future deaths regarding someone performing the supervisory role of being sober while out, emphasising the importance of the role and ensuring it is enforced.

Ryan, who followed his veteran dad Colin into the Army, was given a full military send-off at Clydebank Crematorium after his death.

In an emotional tribute, the family said: “Ryan was born into the military. He was a funny, caring, sometimes shy, always cheeky boy... he was intelligent and popular.

“Ryan loved his regiment and his unit. He trusted his fellow soldiers to have his back.

“As a family we have waited a long time to understand what has happened.”