Couples are weird. And Ask Reddit can prove it.

It devolved into doing it randomly so that we could catch each other by surprise and win!

2. We touch our butts together every night before bed and do a little wiggle. It’s part of our routine now and must be done for optimal sleeping.

3.We have a ‘Kiss Monster’ (spoiler alert: it’s me with a blanket over my head), that visits my SO every now and gives him loads of kisses before slinking off again into the night.

We have never acknowledged that I am in fact, the Kiss Monster.

4.We puff out our bellies and make them touch so that the “babies” can talk to each other. I’m not pregnant and he’s definitely not pregnant.

5.My husband and I “match” our snacks to whatever we are watching. Napoleon dynamite? Better have the tots. Finding Nemo? Probably getting sushi… etc…

6.Cuddle or hold hands while fighting. It reminds us that we’re not fighting against each other, we need to understand each other and work through the issue.

7.We do ‘inverted kissing’. Instead of kissing the lips, one of us surprises the other by opening their mouth big and covering the other party’s puckered up lips.

It’s like kissing the void. It feels really fucking uncomfortable and it’s hilarious. She always does it to me when I’m expecting a kiss.

Bonus points if you can kiss the void for over 5 seconds or have your open mouth over their mouth for a long time. We discovered this when I jokingly opened my mouth during a kiss and she started laughing and going ‘noooo.’

8.Red light bonus round. We kiss when we stop at a red light.

9.Whenever he sneezes, I shout as aggressively as I can SHUT UP. To which he responds even louder, YOU SHUT UP. This is everywhere. At home, in public, it doesn’t matter. It’s gotten to the point where I consciously have to stop myself from shouting at anyone else who sneezes.

10.Flip each other off as a sign of affection.

12.We sneak up on each other and bite each other on the neck to assert “dominance”. We use the “dominance” to win trivial arguments like who do our animals love more.

13.We have the WYK rule. If one of us says, “Would you kindly blah blah blah,” the other one must, no matter what, do that thing. There is zero negotiation. It’s mostly whipped out for benign stuff, sometimes for very silly stuff, but occasionally used in serious situations. It’s equal parts silly, fake outage, and a deep, committed trust. It only works because we trust each other not to abuse WYK or use it for evil.

14.I run outta the bathroom after brushing my teeth in the morning yelling “fresh mouth” and he gets so excited and puckers up for a kiss. Every time.

15.We talk to each other sometimes in different voices and characters we “collected” over the years to make the other laugh/annoyed/uncomfortable etc and just fuck with each other. I often do speak with various accents while she pitches her voice super high and we keep going until one of us gives up.

16.We harvest each other’s goosebumps. When one of us gets goosebumps on our skin, the other will run their hands up and down on their skin “collecting” them.

17.Straight up wrestle for fun. Not the sexy way or the cute let the other one win way, but like actual competition.

18.Me and my girlfriend have started using very random and increasing complex pet names when we answer a phone call from one another. It’s so often now that sometimes I’ll forget and in public loudly answer with: “Hello my Persian tropical ice cream sweety watermelon minx.” Or something to that effect, it changes every time.

19.My girlfriend and I will every so often just lift our top up and say “tits” until the other one looks/acknowledges.

20.Sometimes when I answer the phone I become Detective Tony Pepperoni, and he’s Cheesy Steve and the Saucy Boys. There’s never really any warning, it just kinda happens and it gets pretty intense.

21.I give her a butt massage every single night before she goes to bed.

22.We have a mating dance that has gotten increasingly elaborate in the decade we have been together. Example moves: slapping one’s own butt, moving one’s arms like a choo choo train, one handed clapping.

Some of the moves go out of fashion year to year, but we have a significant repertoire.

23. Listen to his weird tummy sounds. I like to vocalize the really loud ones.

24.While we’re in the shower he’ll cover his body with soap, wrap his arms around me, and then go up and down really fast so he’s rubbing the soap all over me and cleaning me off. We call this “Carl wash” cause it’s like a car wash for me, but my nick name is Carl and he’s washing me off hehe.

25.Penis drawings. I don’t remember who started it but we hide the same penis drawing for the other one to find. She put it in my suitcase when I went away on a hunting trip with my buddies and I had to explain why I had a crudely drawn wang on a sheet of notebook paper packed with my socks. When I returned I hid it in the bottom of her underwear drawer and it took her a few months to find it. She then hid it somewhere and I haven’t found it yet, that was five years ago. She told me I’ll find it eventually but I’m afraid of where it might be. I have told her that if she dies before me that she is getting buried with it and I win.

26.Dated a Swede for a few years. When he taught me how to say I Love You in Swedish, Jag Älskar Dig, I remembered how to pronounce it by saying it as Jog Racecar Day. For the rest of our relationship whenever we wanted to say “love you” or would give each other cards etc, we would just say Racecar.

27.We have a 17 year running game of stealthily pinning a clothespin to the other’s clothes. Sometimes, no clothespin for months, and then bam. One in your armpit.

28.We often just stand in each other’s way for no reason other than to be annoying.

29. My wife usually gets home before I do from work and as soon as I enter she comes to me and we both do a little dance while singing a Bollywood song “Mera Piya Ghar Aaya” (My love has reached home). And then we hug and greet.

It’s a little thing which has turned into some sort of ritual. We love it!

One day I rang the bell, before she unlocked the door she asks, “What’s the password?”

I replied in a low tone “Mera Piya Ghar Aaya” in the same tune. She was expecting me to say something “clever” but she enjoyed the song even more because I have a bad voice.

30.We’ll open our mouths and put our lips together, then sing a pitch and very very slightly raise and lower it together and it creates this weird vibrating dissonance with the notes. 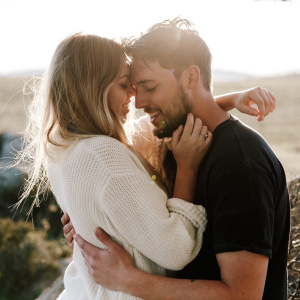 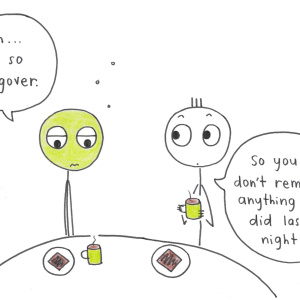 12 Stages Of Being Massively Hungover With The Person You Love