Want to study for an MBA? First understand these
Do you want a free iPhone Xs? Many other amazing prizes are waiting too! 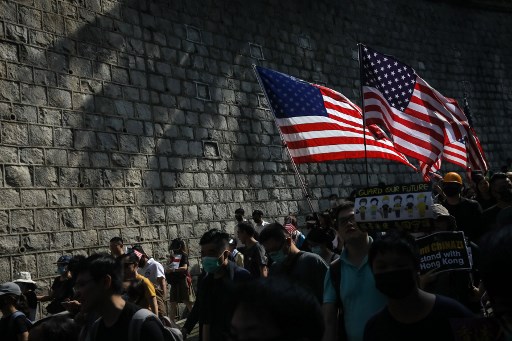 However the National Basketball Association faced a counter-attack in the United States, where presidential candidates and influential senators accused it of kowtowing to authoritarian China.

The NBA, seeking to balance its interests in the Chinese market against American free speech values, found itself being smashed by both sides in a reflection of the broader tensions between the global superpowers.

The league intially put out statements that senior US politicians slammed as bowing to China for financial reasons, while Rockets star guard James Harden apologised.

The Chinese state-run broadcaster responded on Tuesday, announcing it had shelved plans to broadcast a pair of pre-season exhibition games to be held in China this week and was considering more punishments.

“We believe that any comments that challenge national sovereignty and social stability are not within the scope of freedom of speech,” China Central Television (CCTV) said on its social media account.

“To this end, CCTV’s Sports Channel has decided to immediately suspend plans to broadcast the NBA preseason (China Games) and will immediately investigate all cooperation and communication involving the NBA.”

Also on Tuesday, several popular Chinese acting and singing stars said they would boycott the exhibition games — putting the Los Angeles Lakers against the Brooklyn Nets.

Nets players, executives and NBA China officials were to appear at a publicity event at a Shanghai primary school on Tuesday afternoon, but the league abruptly cancelled it just two hours before it was to start, giving no explanation.

NBA representatives did not immediately respond to AFP queries about the cancellation or whether the games themselves — set for Thursday in Shanghai and Saturday in the southern city of Shenzhen near Hong Kong — would go ahead.

‘Biggest lesson’ Meanwhile the Global Times, a nationalist paper known for communicating the ruling Communist Party’s attitudes to the world, issued a blunt warning to global firms that speaking out on human rights and other sensitive issues would cost them market access.

“The problem is that Morey’s freedom is at the expense of (the) Rockets’ huge commercial interests, which the team is unwilling to give up. It’s a paradox with which Americans are grappling,” the editorial said.

“The biggest lesson which can be drawn from the matter is that entities that value commercial interests must make their members speak cautiously.”

In his first public comments on the controversy, Silver late Monday spoke in support of freedom of expression.

“I think as a values-based organization that I want to make it clear… that Daryl Morey is supported in terms of his ability to exercise his freedom of expression,” Silver told Japan’s Kyodo News agency.

“There are the values that have been part of this league from its earliest days, and that includes free expression,” he added, speaking in Japan, where the Rockets and Toronto Raptors play several exhibition games this week.

However the NBA’s initial statement in English on the furore said it was “regrettable” that Morey’s views had “offended so many of our friends and fans in China”.

A Chinese-language version of the statement went further, saying the organisation was “deeply disappointed by the inappropriate remarks”.

Florida Senator Marco Rubio, a Republican, also accused the NBA of throwing Morey “under the bus” to “protect (the) NBA’s market access in China”.

“This is bigger than just the @NBA. It’s about #China’s growing ability to restrict freedom of expression here in the US,” he added in a series of tweets.

And Senate Minority Leader Chuck Schumer, a Democrat, warned “no one should implement a gag rule on Americans speaking out for freedom”.