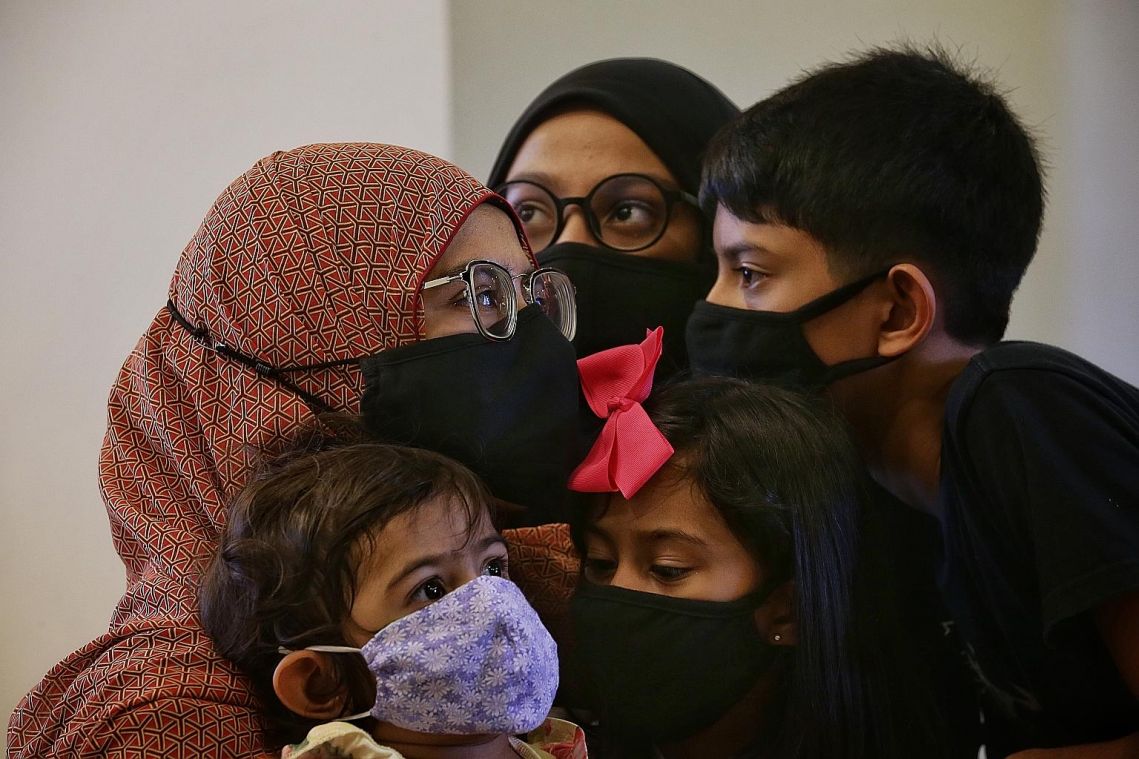 Family of six who caught virus are reunited after ordeal

When she tested positive for the coronavirus on March 23, Madam Seha (not her real name) started to fear for her family, including her two-year-old daughter.

The 38-year-old, who could not sleep that night in her isolation ward, said: "What if they were infected because of me?"

On March 26, all four children - aged between two and 13 - were confirmed to have the virus. Her husband, a 39-year-old civil servant, also tested positive the next day.

For nearly two weeks, the family of six had to live apart in three isolation rooms at the KK Women's and Children's Hospital (KKH).

All of them have since recovered, and Hari Raya Aidilfitri today will feel more special.

The family's ordeal started on March 17 when she said she could not smell the fried rice she was cooking. "I didn't think it was the virus. I thought it was just a flu," said Madam Seha, who lost her sense of taste a week later.

On March 20, she went to see a doctor, who suspected the cause was a blocked nose. "But I could breathe normally," she said. She started to worry when the symptom persisted and went to Changi General Hospital (CGH) on March 22.

There, she did a swab test and was told to wait at home. Less than 24 hours later, on March 23, she received a call informing her she had tested positive for Covid-19.

Madam Seha, who had to pack her belongings before an ambulance picked her up from her five-room Tampines flat, said: "It was heartbreaking. I couldn't hug or kiss my kids."

She was placed in an isolation ward at CGH, and her husband and four children were quarantined.

"I couldn't sleep. I feared for them, especially for my youngest child, who sleeps with me," said Madam Seha. She does not know how she contracted the virus.

On March 25, her children - an 11-year-old boy and three girls aged two, six and 13 - did the swab tests. The results for all four returned positive the next day and they had to be isolated at KKH.

"I kept crying," said Madam Seha, who was then at CGH. "They were in hospital because of me, but I couldn't be there for them."

Hours later, her husband, who had accompanied the children to KKH, was confirmed with Covid-19.

Arrangements were made for Madam Seha to be moved to KKH to be with her family on March 27.

There, she was put in a room with her two-year-old, who was being cared for by her husband.

"I got to see him for a few minutes," she said. "We couldn't have any contact, even though we both tested positive."

Her husband was transferred to be with their son in another room nearby. In a third room was their eldest child, who had to look after her six-year-old sister.

During that period, relatives and friends sent them food, toys and books. Surprisingly, her children adjusted well to being in hospital. She said: "Not once did they complain about wanting to go home."

Every day, Madam Seha would chat with her family at least five times via video calls. "We would remind the kids to drink more water and sleep early," she said.

Her husband and three older children, who did not show symptoms during their stay, were discharged on April 6. Before leaving KKH, they saw Madam Seha for a brief few minutes, but from a distance.

Madam Seha and her youngest child were eventually discharged 11 days later, on April 17.

After nearly a month apart, the family had a meal together before ending the night with a movie.

Madam Seha regained her sense of taste in hospital, and her sense of smell returned a week after her discharge. She said of the ordeal: "It wasn't easy, especially when we were away from one another. I hope no family would have to go through what we went through."